Engineer Mr. Krishna Sundarram says that people who are good at

real-time simulation game ``Factorio'' aiming to escape from stars by making a factory by scraping materials on an unexplored planet, Mr. Krishna Sundarram Claims based on his own experience. 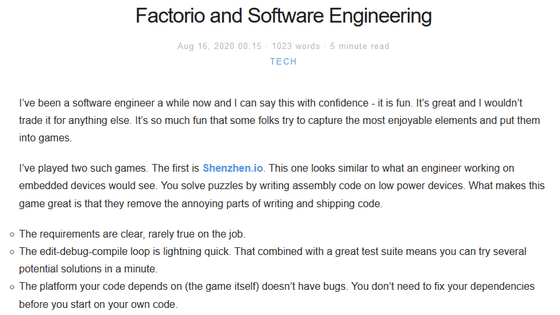 Version 1.0, the official version of the real-time simulation ``Factorio'' that builds a factory on an unexplored planet is finally released-GIGAZINE Factorio mainly 'builds the factory line', but Sundarram says that he feels software engineering in this game.

◆1: Technical debt
Mr. Sundarram, who is a beginner player at Factorio, seems to just connect the various parts of his factory with belt conveyors inexhaustibly, and build a line that is intertwined like spaghetti.

In software development, the complexity caused by choosing 'a quick method for the time being' over 'a time-consuming but optimal method' is called 'technical debt', but Sundarram's factory is exactly the technology. I was holding up my financial debt.

Eventually, Factorio players will have the skills to tame this complexity, making it easier to judge situations. That figure may have something to do with a software engineer. 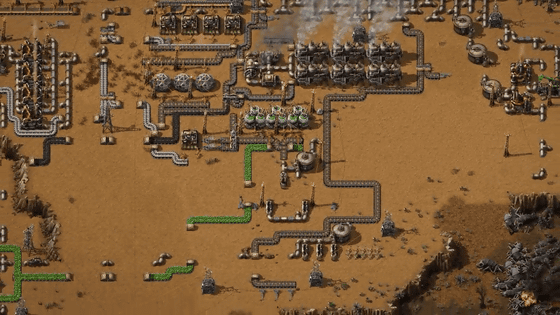 ◆2: DRY (Don't Repeat Yourself) principle
DRY (avoiding repetition) is a principle advocated in the '

road from expert programmer to craftsman ' as a principle to be followed in programming .

At Sundarram's factory, the lines for making electronic boards were distributed at 4 to 5 places, so he said that he simplified the equipment so that he could finally concentrate.

◆3: Scaling
The final processing amount required for the production line at Factorio is 3 to 5 times the initial amount. For this reason, sometimes it is necessary to completely recreate the line from scratch. If you have little experience playing, you may get stuck in building this line, and by playing repeatedly, you will be able to proceed systematically with room to expand the line.

'Keeping room for expansion' is a common part of software, says Sundarram.

◆ 4: Rebuild
You can play as much as you like while playing Factorio in single player mode, but in multiplayer mode your actions can affect other players. There is a risk that other components may be relegated to other people's legs, so Sundarram said he was working with care so that no downtime would occur when he acted.

◆5: Debug
The factory is always far from being 'perfect', and it is commonplace for us to add something that causes an accident. No matter what the cause is, fixing it can lead to another issue. This is also common for code modification work. Even with software, it is important to study and consider what else is available, and new teammates may use knowledge they do not know to lead them to previously unattainable heights.

◆8: Automation
With Factorio, you can mine ore and coal, as well as produce a variety of items, all manually. But it's time consuming, so basically the repetitive tasks are automated.

This 'should be automated rather than manual' can be said in software development, Sundarram said, 'We will automate because we will be happy, but we will do too much and do what we do Even if you forget or forget it, you will continue to move toward automation.' I think that the tendency to push forward is similar to Factorio.

◆9: Fire extinguishing
In software development, it may be difficult to implement new functions due to alert processing. One solution for the team is to have one of the members act as an alert responder and take action while the other members focus on adding features. Sundarram said that he used the same method when playing Factorio with multiple people.

Based on the above nine reasons, Sundarram said, 'Managing complexity', 'Designing a specification and implementing a system that meets the specification', 'Maintaining the system and growing it over time' That is important for Factorio.