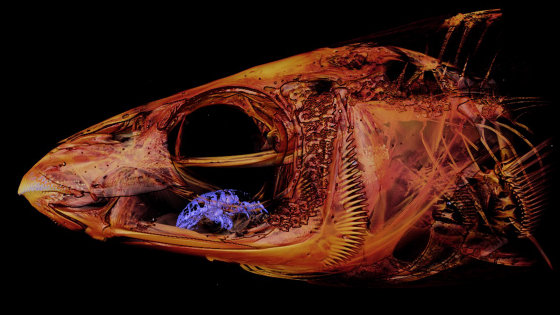 There are various types of parasites that parasitize the 'host' creature, including those that control the host's thoughts and ultimately act to feed themselves. A 3D scan of the head of a fish by an American biologist revealed a parasite that 'parasitizes the tongue of the fish and eventually becomes a 'living tongue' by spilling blood'.

This is what Kory Evans, who works as an Associate Professor of Biology at Rice University in the United States, posted on Twitter on August 10, 2020. Evans Mr. Bella in the middle of digitized scan the, cymothoidae seems parasite has been discovered that it is parasitic as the 'new tongue' in Bella's mouth.

Mondays aren't usually this eventful.I found a tongue-eating isopod (purple) in one of our wrasse scans this morning while digitizing it.These parasites attach themselves to the tongues of fishes and effectively become the new tongue...horrifying # backdatwrasseup pic.twitter.com/axlraUrh8W

In many cases, the coexistence of fish and parasites lasts for several years. Fish live longer than parasites, according to Stefanie Kaiser, a postdoctoral fellow at the National Hydrosphere Research Institute in New Zealand.

Mr. Evans, who performed a 3D scan of the coexistence relationship between Bella and parasites, was in the middle of a project to create a 3D X-ray database of the Perciformes Vera family. According to Evans, Bella has a unique head structure, even without parasites on her tongue, saying, 'They have a second jaw in their throat, like in the movie Alien. Use the second jaw to crush and eat shells such as snails.' The purpose of the project was to make the special skull of Bella 3D and compare it with other fish, but in the middle of that, a fish with a parasite on the tongue was accidentally discovered.

The skull of Bella scanned in 3D looks like this. The part colored purple is a parasite. 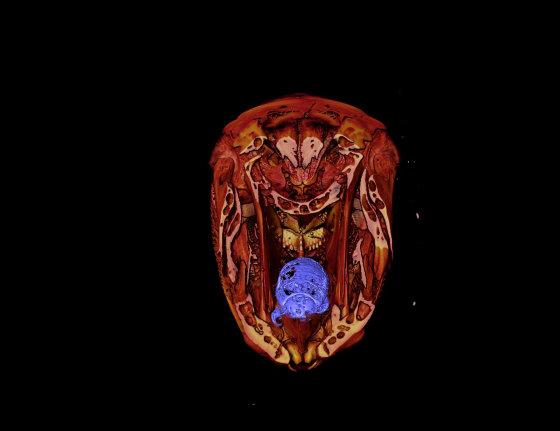 In addition, it seems that sometimes two parasites parasitize the mouth of the fish.