A new 'muscle layer' is discovered in the human jaw 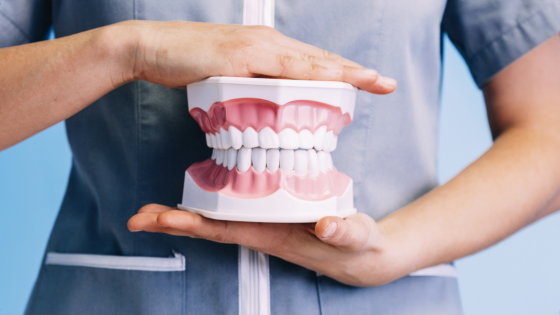 Human anatomical research has been carried out for a long time, but even in recent years, new discoveries are still continuing, such as the discovery of

unknown organs that were unknown until now. A new research team at the University of Basel, Switzerland, has discovered a new 'muscle layer' in the human jaw. 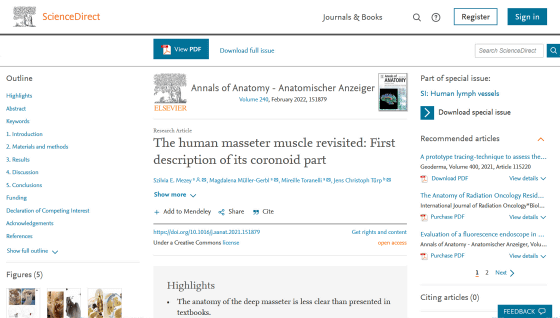 The masseter muscle, which is a type of muscle used by humans when chewing, is the part where you can feel the movement when you chew with your hand on the back of the cheek. In anatomy textbooks, the masseter muscle is divided into two layers, a shallow part on the surface and a deep part in the back, but the research team has a 'third layer' that has been overlooked in the depths of the masseter muscle. I am reporting that I have discovered something.

It seems that the theory that there are only two layers of masseter muscle has been questioned from the results of animal research, but the previous references to the unknown layer of masseter muscle were contradictory. Therefore, the research team anatomically studied the masseter muscle layer by performing detailed anatomy of the head preserved with as many as 12 formalins, MRI scans of living subjects, and analysis of tissue sections taken from body donations. Did.

As a result, it was found that the masseter muscle consists of three layers including the innermost layer, instead of the two layers previously pointed out. 'This deep part of the masseter muscle is clearly distinguishable from the other two layers, both locally and functionally,' said Dr. Szilvia Mezey, Ph.D., Department of Biomedical Sciences, University of Basel, lead author of the paper. ..

The research team named the newly discovered muscle layer 'Musculus masseter pars coronidea'. Below is a color-coded diagram of the three layers present in the chin. S is the shallow part on the surface, D is the deep part, and C shown in red is the third layer discovered this time. According to the research team, the placement of muscle fibers in the third layer contributes to the stability of the mandible and also plays a role in pulling the mandible backward. 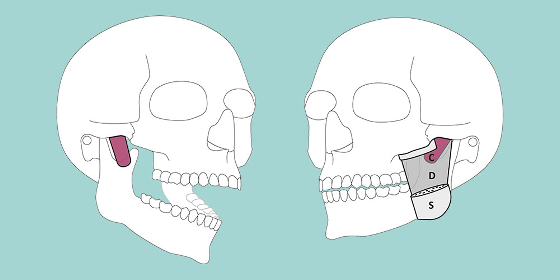 It seems that mammals other than humans also have two or more layers of masseter muscle, but it is not clear whether there is a layer equivalent to Musculus masseter pars coronidea. Also, for some reason, chimpanzees do not have the same third layer as the one discovered this time, suggesting that it may be unique to humans.

The discovery of a new masseter layer may be useful not only for improving anatomical accuracy, but also for all surgical procedures and treatments related to the mandible. Professor Christoph Türp of the Faculty of Dentistry at the University of Basel said, 'Although it is generally believed that anatomical studies over the last 100 years have been exhausted, our findings are similar to zoologists finding new species of vertebrates. I am. '