A substance that seems to be DNA is discovered in dinosaur fossils, and there is a possibility that genetic information can be restored 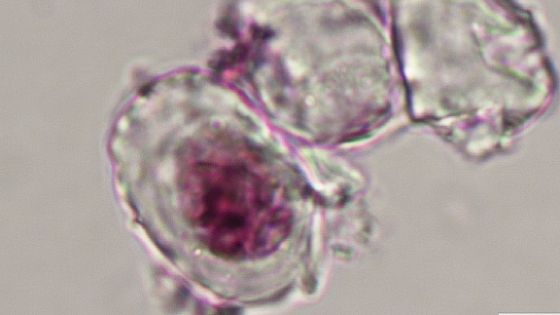 Nuclear preservation in the cartilage of the Jehol dinosaur Caudipteryx | Communications Biology
https://www.nature.com/articles/s42003-021-02627-8

According to the research team, the cell nucleus and its constituent DNA are extremely fragile and are rapidly degraded after the death of the organism. Therefore, cell nuclei are rarely found in fossils. However, there have been cases in which cell nuclei and their constituents were discovered in fossils hundreds of millions of years ago, although the number is small, such as the discovery of dividing chromosomes in fossils of fern 200 million years ago. In addition, a research report has been published that DNA-like substances were discovered in fossils of Hypacrosaurus cartilage in 2020.

In this study, the cartilage part of the fossil thigh (roughly) bone of Caudipteryx excavated in China was observed in detail, and the cell nucleus and DNA were searched. The research team stained thin sections of fossil cartilage by the

hematoxylin-eosin staining method , which stains the cell nucleus in deep purple and stains other substances in light purple or pink. As a result, we succeeded in discovering the cytoplasm (cy), nuclear envelope (nm), and cell nucleus (nu). In addition, the cell nucleus contained a substance that appeared to be chromatin (ct), a complex of DNA and protein. 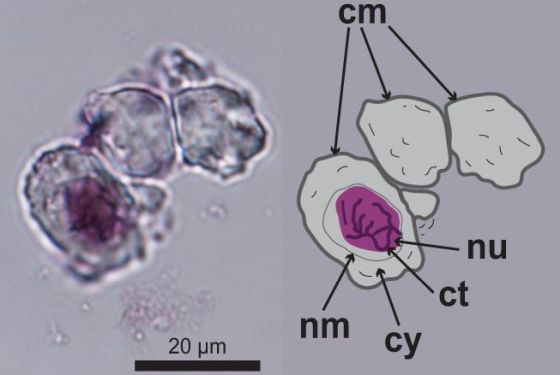 'The results of this study support the hypothesis that fossil dinosaur cartilage contains genetic information,' the research team said, and future research will reveal some of the genetic information of dinosaurs. I have high expectations. Meanwhile, Emily Carlyle , a researcher at the University of Bristol on fossil conservation and analysis, said, 'It looks like the photomicrographs taken this time definitely show cell nuclei, but they have fossilized. At that time, the constituents of the cell nucleus may collapse, and the genetic material contained in the cell nucleus may be an aggregate of meaningless minerals. ' He points out that the process of fossilization needs to be elucidated.