The oldest sperm in the world is discovered 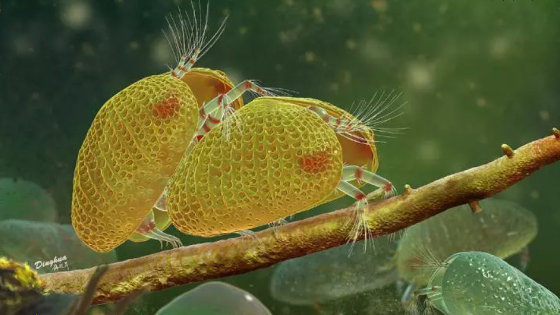 Paleontologists have announced that they have discovered the world's oldest sperm in amber 100 million years ago. The sperm and not of dinosaurs, has a much longer sperm cells than the body length,

ostracod is that of those of the.

100 million-year-old sperm is the oldest ever found. And it's giant. | Live Science
https://www.livescience.com/oldest-sperm-found.html

Ostracods have been found in Cambrian fossils in ancient times, but they still inhabit today. The size of the ostracod is about 0.5 to 2 mm, which is about the size of a daphnia, and the whole body is covered with two shells, and it is said that the appendages such as shrimp and crab are sometimes taken out of the shell.

Ostracods are generally very small creatures, but the sperm cells of ostracods are large compared to their body length, and the longest one reaches 11.8 cm. A research report on September 16, 2020 revealed that paleontologists at the Chinese Academy of Sciences discovered giant ostracod sperm in fossils 100 million years ago.

The sperm in question was found in stamp-sized amber found in northern Myanmar. 39 ostracods were trapped in this amber, 31 of which were new species. The new species of ostracod was named 'Myanmarcypris'. Myanmarcypris is only about 0.59 mm long, but researchers have found that females of Myanmarcypris have eggs of about 50 micrometers and have a 'spaghetti-like' in the fertilization sac that stores sperm received from males. I noticed that.

Computed tomography of the fertilization sac to create a three-dimensional image revealed that it contained 'the oldest sperm in the world.' The 'world's oldest sperm' discovered so far was 50 million years old. According to Renate Matzke-Karasz of Ludwig Maximilian University Munich University who participated in the study, animals with huge sperm take a lot of time and energy to reproduce, but even 100 million years ago, shellworms have large sperm. Reproduction was an 'exciting discovery.'

The following is an illustration that reproduces the mating of ostracods that lived 100 million years ago. Matzke-Karasz is also surprised that fossils of ostracods, which are supposed to be aquatic animals, were preserved in amber made from resin. In the future, Matzke-Karasz said he would like to find fossil ostracods from amber of other times.