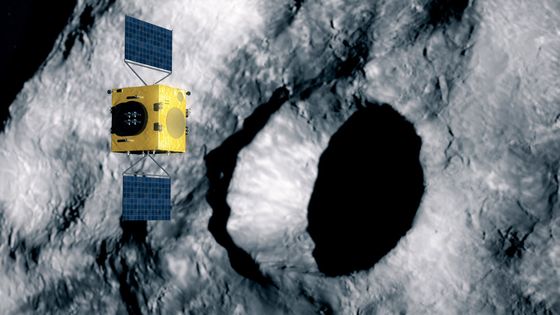 Some asteroids that move in space pass by the immediate vicinity of the Earth, and researchers are thinking of 'how to change the orbit of an asteroid that is likely to hit the Earth.' On September 15, 2020, the

European Space Agency (ESA) will work with German space development company OHB for 129.4 million euros (about 16 billion yen) to realize the project 'Hera' on how to change the orbit of asteroids. Announced that it has signed a contract. 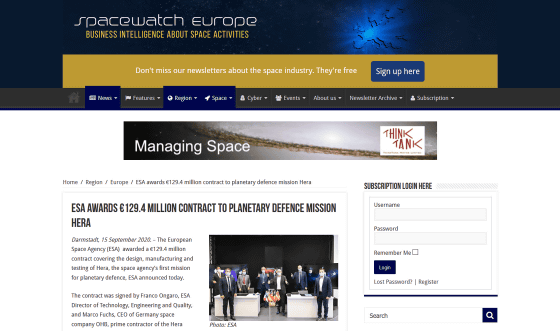 65803 Didymos (Didimosu) asteroid that is, the periphery of the body of about 780 m in diameter, a small celestial bodies orbiting called 'Dimorphos (Dimorufosu)' of about 160 meters in diameter double asteroid is. Didymos is said to be a celestial body that does not have the risk of colliding with the Earth, but the AIDA project, which investigates how to use Didymos to change the orbit of asteroids, is an international team including NASA and ESA. Is being promoted by.

In the AIDA project, NASA plans to launch a spacecraft called DART in 2021 and hit Dimorphos, which orbits the main body. Since DART collides with Dimorphos with a fairly strong force, it is expected that a crater with a diameter of about 20 meters will remain on the surface of Dimorphos, and changes will appear in the orbit.

ESA will then launch a spacecraft called 'Hera' in 2024 to investigate the effects of the DART collision with Dimorphos. Hera will be launched with the exploration CubeSat ' Juventas ' and will reach Dimorphos in 2026. Hera is equipped with a small laser radar system, a thermal infrared device, a telescope, and an

asteroid framing camera (AFC) , and will image the circumference of the crater with a resolution of 10 cm square. In addition, Juvertas is equipped with a low-frequency radar, 3-axis gravimeter, visible light camera, accelerometer, gyro, etc., and it seems that it will investigate the gravitational field and the internal structure of dimorphos, and the mass measurement of dimorphos has also attracted a lot of attention. I am.

ESA's 16 billion yen contract with OHB at the European Space Agency in Darmstadt, Germany, includes the design, development, integration and testing of Hera, including advanced navigation and control systems.

And while Germany's OHB has taken the position of prime contractor, Germany isn't the only one contributing to Hera's project. In addition to Germany, a total of 18 countries including Italy, Belgium, Luxembourg, Portugal, Romania, Czech Republic, Spain, Austria, Denmark, France, Hungary, the Netherlands, Switzerland, Finland, Poland, Ireland and Latvia are contributing to the project. That is. 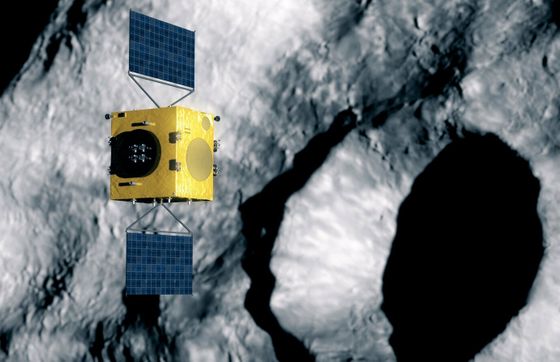