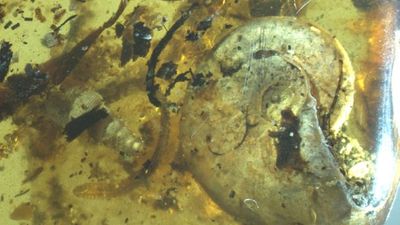 firewood produced by heating and compression of natural resin is not only prized as jewelry itself, but it may also contain organisms such as insects and lizards inside. In Myanmar, a large number of whales containing part of dinosaurs and lizards are found, and it is reported that some whales containing marine organisms such as ammonites that lived in the ancient sea were also found.

Rarely are ancient creatures trapped in a cage, and in the past have been found lizards and feather-covered dinosaur tails of 99 million years ago, birds of 100 million years ago, etc. . A whale is a kind of plant resin that has undergone chemical changes, so most of the trapped organisms live on land.

However, it has been reported that the paleontologist team found in Myanmar the whales contained four sea snails, crustaceans like sea bream and young ammonites. The size of the whale was as small as 33 mm x 9.5 mm x 29 mm, but in addition to marine organisms, a great variety of organisms such as 22 ticks, 8 flies and 2 beetles were trapped. It was said that Researchers have stated that 'it is rare to find underwater creatures in a cage, which is very rare if it is a living creature in the ocean'.

Uranium and lead dating revealed that the volcanic rock formation where the weirs were found is about 99.8 million years ago, while the ammonite that appears to be 113 million years ago from the upper sandstone layer For example, it is not clear at what age the whale was made, such as the discovery of fossils. Possibly, there is a possibility that the cocoon was formed before 113 million years.

As for the mystery, 'Why are such diverse organisms trapped in one cage?', The shells of ammonites and marine crustaceans are worn away, and the openings of ammonites are filled with sand. Point is a hint. Also, since the resin does not solidify properly when immersed in water, even if the resin mass falls into the water, organisms in the water will not be trapped in the cage.

A team of paleontologists speculates that ammonites and other marine organisms were dead when they were trapped in a cage and had been launched to land. While rolling on the beach, the shell was worn away, and the ammonite was likely to be clogged with sand and then trapped in a weir by the resin flowing out of trees near the shore, the research team said.