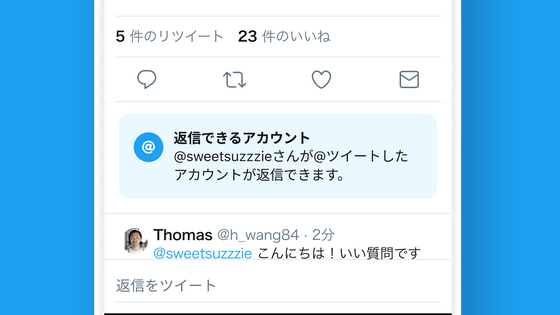 On August 11, 2020, Twitter implemented 'a function to limit who can reply to a tweet'. This makes it possible to limit replies from people you don't want to reply to.

How to join a new conversation begins

Twitter, which has been striving to improve the soundness of discussions for some time, announced in January 2020 a ' function to decide who can reply .' We had a test in May. 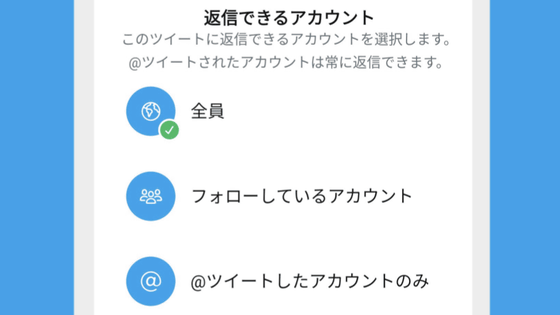 Suzanne Xie, director of product management at Twitter, updated the official blog on August 11th: 'It's sometimes smoother to have conversations with people who can choose who to reply to. With this feature, unwanted replies no longer interfere with meaningful conversations,' he announced a formal implementation of the reply limit feature.

How to actually use the new features is explained in the tweet below.

Starting today, anyone can use this setting. Before tweeting, please tap ???? 'All accounts can reply' and select who can reply to the tweet. @suzannexie
We would like to introduce what you have shared through the test ???? https://t.co/YiDzxAx1t2 pic.twitter.com/MLtv0OiQWD

By default, any user can reply to their tweets. To change this, tap 'All accounts can reply' when you post a tweet. 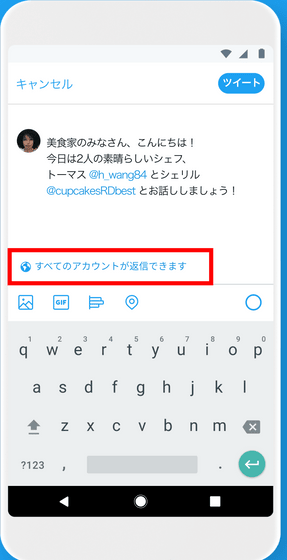 Then, the setting screen for selecting the person who can reply will be displayed. The settings that can be selected are from top to bottom: ``Everyone (default setting)'' ``Following account (only people who follow or 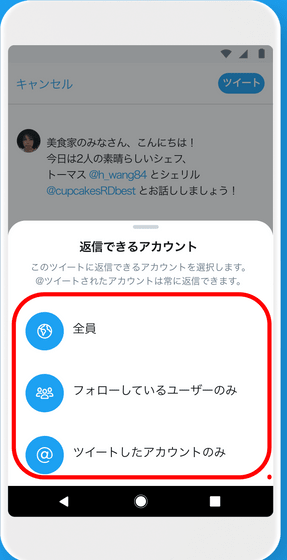 Tweets that limit the number of people who can reply will be displayed with the reply button grayed out when viewed by people other than those who can reply. 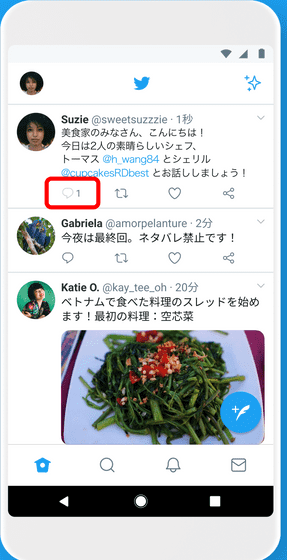 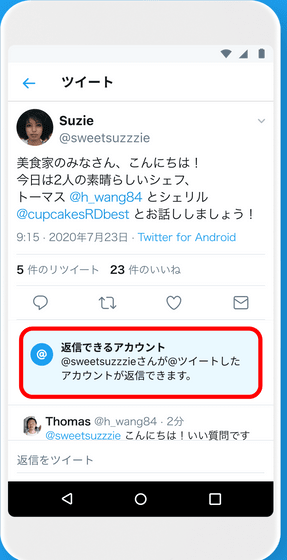 According to Mr. Xie's announcement, the May test revealed that 'malicious replies were blocked on average 3 times, while malicious retweets were done only about 1 time on average'. We also did not see the worrying increase in direct messages.

From this, Xie pointed out, 'the problematic replyer could only find a reply.' He also said that people who were harassed were three times more likely to use the reply-reply feature, which is 'a useful feature for people who are particularly harassed.'

In addition, Xie said, 'The number of new retweets with comments on the timeline has been quadrupled. That is, when users see tweets with restricted replies, they are proactive about those without replies If you have an objection, you can still spread it with commented retweets.These retweets have more followers than the original tweeter. Even if there are many tweets, we often see more views and 'likes' than the original tweets, 'said that it is possible to constructive discussion such as pointing out tweets containing incorrect information due to retweets with quotes. Was shown.