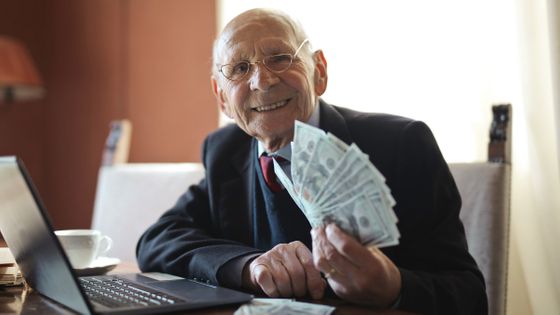 Human well-being is related to various factors such as health and human relationships, but the most controversial issue is money. A number of studies have been conducted on the relationship between money and happiness, and a study published in 2010 stated that ``the happiness level of money reaches a ceiling when household income exceeds $75,000 (about 8 million yen). to become '

it had been pointed out . However, a new study found that 'the relationship between money and happiness is stronger than before with the widening disparity.'

Money buys even more happiness than it used to
https://theconversation.com/money-buys-even-more-happiness-than-it-used-to-141766

It is sometimes said that “happiness cannot be bought with money”, but various studies have confirmed that money and happiness have a certain relationship, and there are also research results that a healthy person has a longer life expectancy . .. A 2010 study also suggested that as you earn up to $75,000, your happiness increases.

To better explore the relationship between money and happiness, Jean Twenge , a professor of psychology at San Diego State University , and his team of researchers analyzed data from a comprehensive social survey conducted by the University of Chicago since 1972. I did it. The research team analyzed data on more than 40,000 Americans over the age of 30 collected from 1972 to 2016 and investigated the relationship between socioeconomic status and happiness. The graph below shows the level of education and the percentage of people who answered that they are 'very happy', the red graph is 'white for 4 years college graduates', the orange graph is '4 years' Indicates a white man who has not graduated from college.' In the 1970s, the percentage of whites over the age of 30 who answered that they were 'very happy' was about 40%, which remained unchanged between university graduates and those who did not, but as of 2016, they were 'very happy.' 40% of university graduates replied, whereas only 29% of those who did not graduate from university. A similar trend seems to apply to income, 'the difference in happiness by income level increased steadily from the 1970s to the 2010s,' Twenge said. 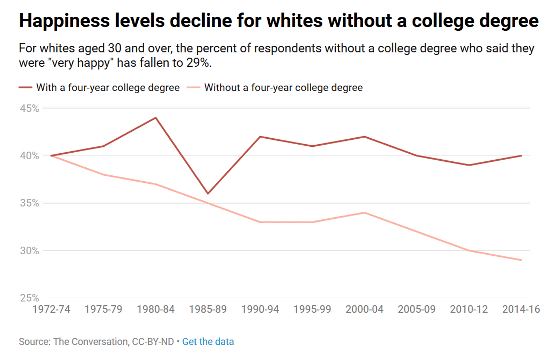 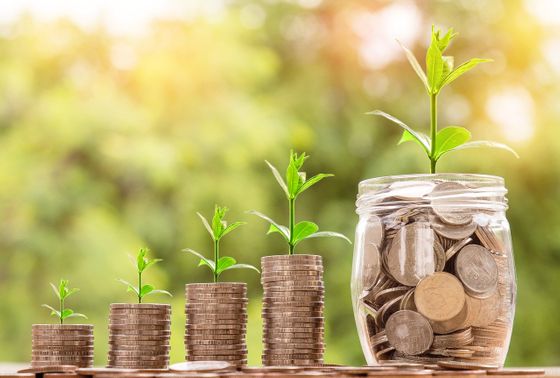 The research team believes that one of the reasons for this study's findings is 'increasing income inequality in the United States.' The CEO of an American company earned 30 times more than ordinary employees in 1978, but as of 2018, it earned 271 times more than employees.

In the past, even those who had not graduated from college earned enough money to buy a house and support their family, but in recent years it has become difficult for high school graduates to support their families. In the United States, where the income gap is severe, the gap between “people who have money” and “people who do not have money” is deep, and basic needs such as housing, education, and medical care are rising faster than the salary increase of workers. Due to rising costs, there are fewer middle class.

Marriage rates in the 1970s did not differ much depending on income and education level, but in recent years it has been pointed out that people with higher incomes and higher education levels are more likely to get married. On average, married people tend to have higher levels of happiness than unmarried people, which is another factor that explains the difference in happiness depending on income. 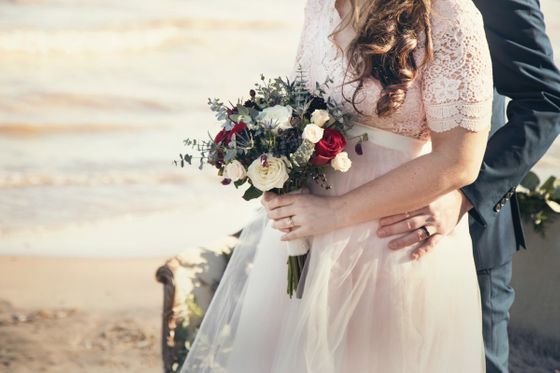 It is already well known that the disparities in income, happiness, and socio-economic status within the United States are becoming more serious, and politicians are recognizing this problem. In recent years, much attention has been focused on basic income , where people receive a certain amount of money from the government, and it is important to try to prevent the division of society by class, Twenge said.