Real-time demo movie by PlayStation 5 of the next-generation game engine 'Unreal Engine 5' is released for the first time, 'completely live-action' 3D graphics are a must-see Epic Games has announced the latest version of the

Unreal Engine 5 features two technologies: virtual micropolygon geometry 'Nanite' and dynamic global illumination solution 'Lumen'. Nanite allows movie-quality assets such as ZBrush models, photogrammetric scans, and CAD data to be imported directly into the engine, eliminating the need for artists to worry about polygons, memory, draw calls, and other constraints. That. This eliminates the need to manually create LODs and quality loss.

On the other hand, Lumen is a writing technology that reflects writing information in 3D space at ultra-high speed. By rendering the reflection and mutual interference of light on a wide scale from kilometers to millimeters, it is possible to instantly reflect changes in the sun angle over time, the light of a flashlight, the light inserted through a hole in the ceiling due to bombing, etc. The artist simply moves the lights in the Unreal Editor to see the lighting as it will be performed in the real game.

The real-time demo actually performed live on PlayStation 5 can be seen from about 1 minute 27 seconds of the following movie. Japanese subtitles explain in detail what kind of arithmetic processing is performed behind each scene.

At the beginning of the real-time demo, the scene where the main character explores the cave looks like this. A visual that can be believed even if it is called a live-action movie. Lumen's depiction of light in space. When you move the light source, the result is immediately reflected as follows. No need to create lightmaps, bake, etc. 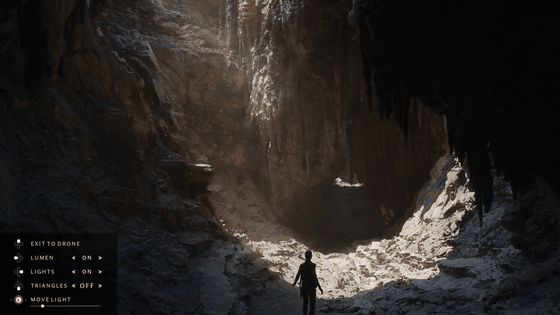 It also has a physics engine that accurately performs fluid simulation and rigid body simulation, and a rendering system that records and plays back sound effects in a specific space. Lumen demonstrates its power in the following scenes where the main character explores the dark ruins. Dynamic lighting reproduces the gloss of a metal surface illuminated by a light source such as a flashlight. In the scene where the ceiling of the ruins collapsed partly and the light came in ... The light from the hole in the ceiling instantly changes the visuals of the entire ruins. The images below are imported directly from ZBrush and have more than 33 million triangular polygons in one image. Nearly 500 of the same statues are installed in the space that follows. In total, it is said that the number of triangular polygons is more than 16 billion with images alone. All of this is running on PlayStation 5. As mentioned above, Unreal Engine 5 will produce 3D graphics with quality that can be said to be completely live-action, but further Epic Games says, `` Games created with Unreal Engine have gross revenue of 1 million dollars (about It is exempt from royalty until it exceeds 107 million yen. ' In addition, according to the FAQ , this royalty payment obligation only applies to 'games or other interactive commercial products', so animation products etc. can use Unreal Engine 5 free of charge. is.