What are the characteristics of human beings who have not been able to reproduce social media bots that continue to evolve like humans? The bots that are often found on social media such as LINE, Twitter, and Instagram are evolving year by year, and in addition to being able to talk to people, the way they talk is becoming more human. However, a study by Emilio Ferrara, an associate professor at the Department of Computer Science at the University of Southern California, found that there is a huge difference between bot conversations and human conversations on social media. 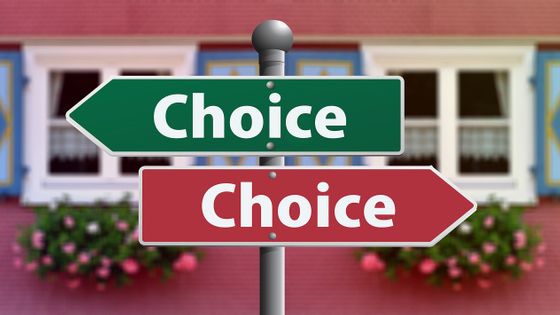 In the graph below, the vertical axis represents the probability of two consecutive tweets being posted, and the horizontal axis represents the time elapsed since the user started accessing social media. Bots are orange (bots, HL) and green (bots, FE) lines, and humans are blue (humans, HL) and red (humans, FE) lines. FE is data extracted during the election period in France posted from April 25, 2017 to May 7, 2017, and HL is randomly selected data. The probability of continuous posting decreases for human tweets over time, but the probability of continuous posting increased for bots at regular intervals such as 30 minutes, 60 minutes, 120 minutes. 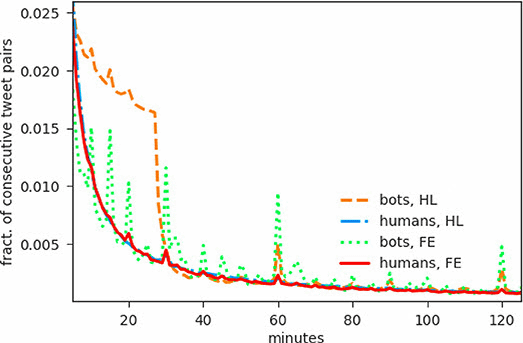 In the graph below, the left side of the vertical axis is FE, and the right side is HL, the high retweet rate per session, and the horizontal axis is the number of sessions divided into 20 to 25 posts. It can be seen that humans gradually increase their retweet rate in their sessions and bots tend to retweet less often. However, due to advertising, the bot's retweet rate during the election period is slightly higher. 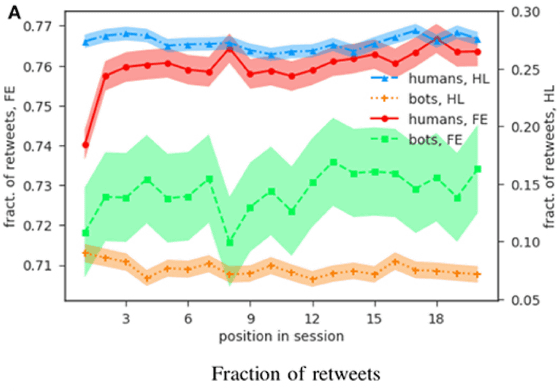 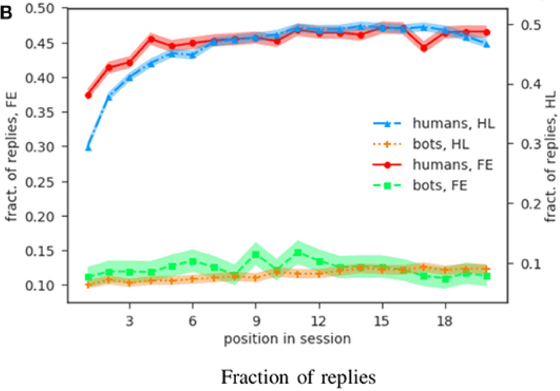 The following graph is not a reply, but a survey of the ratio of posts and mentions including the account name of the other party in the tweet. The horizontal axis is the number of sessions, and the vertical axis is the high mention rate per session. Mention rates were also higher for humans and lower for bots. 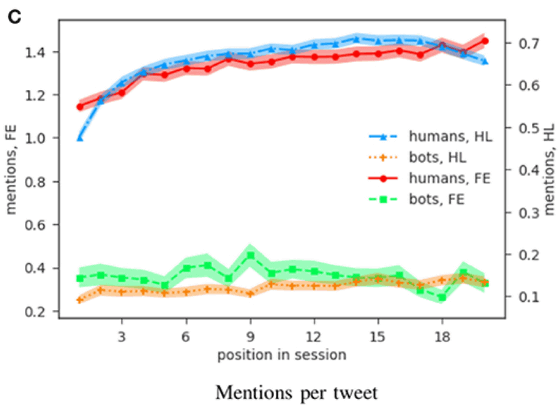 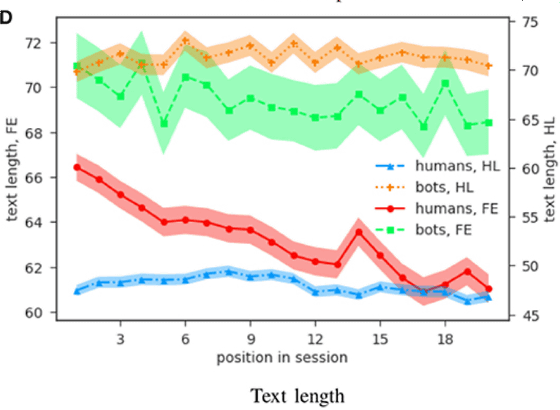 Humans had more sessions, and the number of tweets on the timeline increased over time, so the ratio of retweets, replies, and mentions gradually increased. Regarding the reason why the number of characters in human tweets decreases, it is thought that human beings get tired as communication continues, making it difficult to write tweets.

On the other hand, a bot that almost always monitors the timeline makes a certain number of replies and retweets regardless of the passage of time. In addition, since bots are tireless, they did not observe behavioral changes like humans, such as reduced tweet rate or reduced word count over time. Ferrara et al. Provide the bot's behavioral characteristics to the bot detection system developer and contribute to improving the accuracy of bot detection.

'Bots are constantly evolving. Advances in AI have made it possible to create realistic bots that more closely mimic the characteristics of human speech and interaction. We are on social media. We are continually investigating human-specific behaviors in and aiming to develop sophisticated tools for using them to detect bots. '