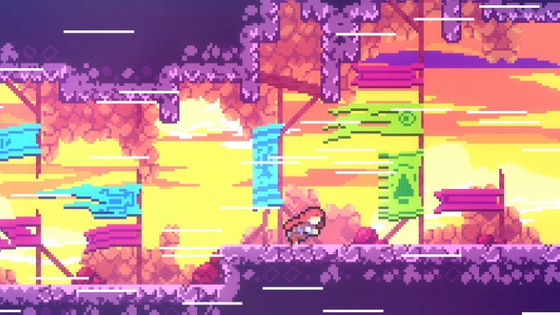 Maddy Thorson, a developer of the highly-acclaimed 2D action game Celeste, which won the Game For Impact category at The Game Awards 2018 , is one of Celeste's action elements. Explains the 'points that are particular' on Twitter.

Many 2D action games, such as the Super Mario Bros. Series and Rockman, have appeared in many games, but Celeste is extremely simple. In a game that uses the three actions of `` jump '' `` air dash '' `` climb '' and rushes through the stage while avoiding enemy attacks and damage terrain such as needles, you die when you eat one enemy attack It is also one of the so-called 'immediate death games'. You can understand what kind of game Celeste is by watching the following movie.


One of the key points revealed by Celeste developer Thorson is the specification called 'Coyote Time', which enables jumping as soon as the character falls off the scaffold, even if it falls. In the case of Celeste, where very precise operations are required, the presence of coyote time has the effect of reducing the number of fall deaths.

A short thread on a few Celeste game-feel things :) I don't think we invented any of these.

1- Coyote time.You can still jump for a short time after leaving a ledge.pic.twitter.com/nMK9ZLYbhM

The second point is 'jump buffering'. This is a system that activates the second jump immediately by pressing and holding the jump button before jumping and landing. In Celeste, it is necessary to make continuous jumps lightly to get through enemy attacks, etc., so it is thought that it was born to reduce the interval between each jump.

2- Jump buffering.If you press and hold the jump button a short time before landing, you will jump on the exact frame that you land.pic.twitter.com/iPWS8fXbly

The third is 'halving gravity at the top of the jump.' In Celeste, when the character reaches the top of the jump, the gravity applied to the character is reduced by half. Thanks to this processing, Thorson explains, 'The operation time until landing increases and the operation feeling becomes comfortable', but at the same time, 'It may be difficult to understand just by looking at (the existence of the processing) '

3- Halved gravity jump peak.This one is hard to see.If you hold the jump button, the top of your jump has half gravity applied.It's subtle, but this gives you more time to adjust for landing, and also just looks / Pleasant Feels. Pic.Twitter.Com/8VquDI9E3v

Points 4 and 5 focus on avoiding collision with objects. As you can see from the GIF movie below, if you jump and hit the corner, the character will shift a half step and avoid collisions.

4- Jump corner correction.If you bonk your head on a corner, the game tries to wiggle you to the side around it.pic.twitter.com/kz4Dv2QZw9

When colliding with the floor when sprinting, it shifts upward to avoid collision. Celeste often passes on narrow roads, so by adding such processing, you can enjoy the action without stress.

5- Dash corner correction.Also tough to see, but if you dash sideways and clip a corner, it'll pop you up onto the ledge.pic.twitter.com/lOJm3jVY1Y

Point 6 is also related to 'Avoid collision with objects', and if a character dashes and collides with a scaffold that can pass through from the side, avoid collision so that the character always comes to the upper side instead of the lower side of the scaffold That is the process. This is done because if the character goes under the scaffold, it will inevitably result in a fall.

We Also Pop 6- You Up Onto Semi-Solid Platforms If You Dash Sideways Through Them. Pic.Twitter.Com/SrhoYJs9BA

7- Lift momentum storage.Jumping off a fast-moving platform adds the platform's momentum to your jump's speed.Madeline 'stores' this momentum and will still get the boosted jump for a few frames after the platform has stopped.pic.twitter.com / l52GMeo3lV

According to Thorson, even if the lift stops, the momentum addition process will continue for a few frames . Thanks to this process, it is possible to perform a high-speed action that jumps and moves from one moving lift to another.

Points 8 and 9 are the specifications that a 'triangle jump' that kicks and jumps on the wall occurs even if you are away from the wall. In Celeste, a triangle jump can be activated even if it is 2 pixels away under normal conditions. Although it is a slight impression that 2 pixels, Thorson says, 'Celeste has a resolution of 320 × 180 pixels, so 2 pixels is not small.'

8- You can actually wall jump 2 pixels from a wall. (That sounds tiny but this is a 320x180-resolution game: P) pic.twitter.com/fzm7NOee5p

'Super Wall Jump', which allows you to make a large jump when you dash upward while dashing, activates even if you are 5 pixels away from the wall. 'A 5 pixel is more than half a tile!' Says Thorson. This is particular point 9.

9- If you're doing a 'super wall jump' (ie: a wall jump while dashing upward), this is a more precise and demanding maneuver so we let you do it from even further away (I think it's 5 pixels, which is more than half a tile!) pic.twitter.com/WMvJhrGOb1

The ten most important points are the specifications related to the character's 'stamina'. Celeste uses a system that consumes stamina every time you move while holding on to the wall, and slides off the wall when the stamina runs out. Especially when jumping right above, a lot of stamina will be consumed, but if you move away from the wall immediately after jumping right above, all the stamina will be returned.

... So if you perform the straight upward jump, then press away from the wall shortly after, the game refunds the stamina spent by the upward jump, and applies the horizontal wall jump force.It converts from one jump type to the other after the fact.pic.twitter.com/ECbrajhkVb

If you jump sideways from the wall, all stamina will be returned. Therefore, if you are stuck on a wall, you can take two options: 'jump horizontally and move heavily' or 'jump vertically and then move a little to gain height'. Thorson commented, 'This specification is complex, but it is especially important in Celeste.'

In Celeste, various specifications are incorporated in the action that the character simply jumps and moves. Thorson commented on the basic philosophy of these specifications: 'We add a little cheating to the operation to improve the player's feeling of operation.' According to Thorson, 'Celeste is a very difficult game, but I think these specifications make players feel kind.'

You might have noticed a pattern! All are centered around widening timing / positioning windows, so that everything is fudged a tiny bit in the player's favor.I think this is a big reason why Celeste can feel kind even though it's very difficult-it wants you to succeed.