The preview video released at the same time as the announcement is as follows. Just over a few hours after its release, it has been played over 1.1 million times, indicating its high degree of attention.


Call of Duty: The stage of Warzone is 'Verdansk', which combines the most popular maps in the series with new elements.

There are several two- and four-seater vehicles, and the most powerful one is the four-seater helicopter.

'Basic play is free for everyone'

Machine gun shooting with a machine gun from a helicopter is also possible.

The game starts with a descent from the sky like a battle royal game.

'On one vast map'

Quickly move through a vast map on a two-seater ATV ...

Mince the enemy with a helicopter rotor ...

Shoot down a helicopter with a rocket launcher.

One of them is 'PLUNDER'. A mode in which you compete with your friends and fight for in-game cash.

The squad that earns the most cash within the time limit wins the cash that can be received as a reward for mission clearing and enemy defeat.

'BATTLE ROYALE' is a mode where you fight for survival until you reach the last squad. Call of Duty: Warzone is a battle royal with a maximum of 50 squads as you fight in squads of three.

Like other battle royal games, poison gas is sprayed over a certain area of the map over time, and the play area becomes smaller.

Call of Duty: In Warzone, you will be taken to a concentration camp even if you lose once. Therefore, a special resurrection system has been adopted, in which one-on-one battles with other losers are made, and if you win, you can respawn. 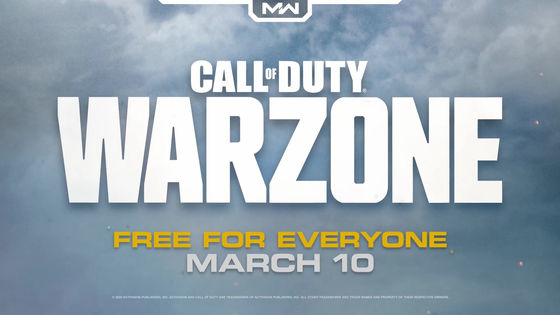 If you own the commercial version of Call of Duty: Modern Warfare , you can play Call of Duty: Warzone at 0:00 on the 11th, 4 hours before the official service launch.