What are the lessons learned from the 'Prohibition', which was a success in quitting alcohol? January 16, 2020 was the 100th anniversary of the prohibition of drinking and selling alcohol, which was made illegal in the United States in 1920. From the enactment in 1920 to the abolition in 1933, the effect of the prohibition law on the American society was summarized by Boston University economist Jay Zagorsky from the perspective of an economist. Is.

How Prohibition changed the way Americans drink, 100 years ago
https://theconversation.com/how-prohibition-changed-the-way-americans-drink-100-years-ago-129854 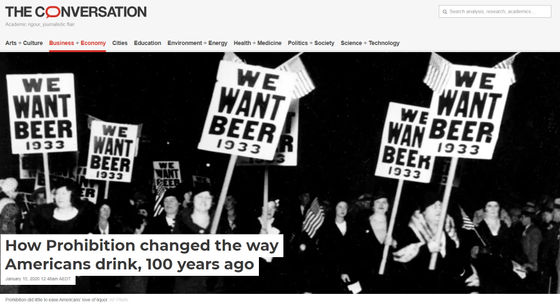 The abolition movement was once suspended in the

Civil War , which required tax revenues from the liquor tax. However, in World War I, 1914-1918, further efforts were made to conserve cereal, the source of liquor. Prohibition was advanced.

The following is a graph showing the transition of the average annual alcohol intake of Americans. Yellow is beer, red is wine, blue is distilled liquor, and the red frame is the time when the Prohibition Act was enforced. In 1916, just before the Prohibition Act was enacted, Americans consumed about 2 gallons (about 7.5 liters) of alcohol per year. 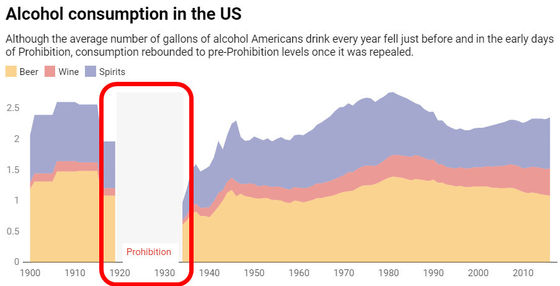 Under these circumstances, the 18th Amendment to the United States Constitution , which bans the production, sale, and transportation of alcoholic beverages altogether, the so-called prohibition law was enacted. When the prohibition law is mentioned, it is often emphasized that 'you can drink as much as you like and you can not drink a single drop overnight', but in fact the situation at the time when drinking was prohibited in various parts of the United States It is an extension.

However, alcohol consumption quickly recovered, and in 1921 the following year, it was two-thirds of the previous level. In this regard, Zagorsky said, 'The reason for the decline in alcohol consumption could be the severe economic recession of 1920 and 1921. The US economy subsequently recovered in 1922, so people buy moonshine. And suggested that the decline in drinking was more affected by the recession than by prohibition.

Since the abolition of the Prohibition Act in 1933, Americans' alcohol consumption has gradually increased, and in the 1960s and 70s, it was almost the same as in the 1900s. ◆ Lesson of the Prohibition Law
Prohibition, which did not reduce alcohol consumption as much as expected, did have a number of effects on American society. For example, the habit of gathering at bars and drinking alcohol has fallen, and drinking at home has increased. It is also often pointed out that the increase in violent crime and the rise of mafia dealing with moonshine are common.

'From an economist's point of view, if you want people to stop doing bad things, it's better to raise prices than to ban them. In the 1970s, it was 40%,' said Zagorsky. It's like the percentage of smokers in the United States fell to 16% in 2018. ' 'The prohibition reminds us that banning things rarely succeeds,' he concluded.