Craig Wright, an Australian investor who claims that `` Satoshi Nakamoto who invented the theory and bit coins that are the foundation of cryptocurrency, is myself '' has been accused of `` monopolizing bit coin '' In a new case, the court ruled that 'Craig Wright is not liable for payment.' However, the court is asking Craig Wright for 'proof of Satoshi Nakamoto.' 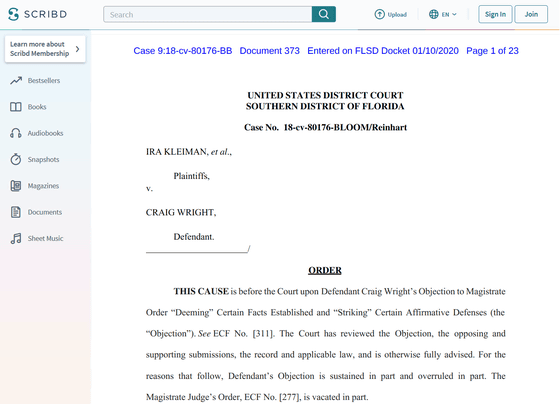 Wright, 'is Satoshi Nakamoto I'm' on May 2, 2016 and has come forward their own person. Mr. Wright explained to the bereaved family of Dave Clayman who explained `` Jointly developed the bit coin system '' `` 1.1 million BTC jointly owned by Mr. Wright and Clayman (about 1 at the time of article creation) (Equivalent to ¥ 60 trillion yen) '.

A man who claims to be the inventor of bitcoin loses, ordered to pay up to 500 billion yen of bitcoin-gigazine In September 2019, the Florida Federal Court ruled that Bitcoin mined by Mr. Wright before 2013, when Mr. Clayman died, was `` all common property with Mr. Clayman '', and bits mined before 2013 He ordered Wright to hand over half of the coin and the associated intellectual property to the bereaved. However, Wright has appealed the ruling.

`` We have determined that the fact that Wright and Clayman were on an equal footing was not related to Wright's bitcoin holdings, '' explained Judge Beth Bloom of the Southern Florida District Court. 'The previous decision was not appropriate,' he withdrew his order to pay Wright. However, the ruling has an incidental condition, claiming that 'we carry in-bond the key needed to get Bitcoin. The key will be returned from the vendor in January 2020.' Mr. Wright was ordered to `` submit the information necessary to unlock the encrypted file and the list of bitcoins held by February 3, 2020 '' . The court will impose additional sanctions if it violates this order. Many experts have raised negative opinions about the question, 'Is Wright really Satoshi Nakamoto?' `` To be honest, he's covered with lie, '' said cryptocurrency expert Mati Greenspan, founder of Quantum Economics , and Vitalic Buterin, the inventor of Ethereum, said, `` Craig Wright. and is a swindler, ' he asserted . Judge Bruce Reinhart, the first trial judge, said, `` This trial is not 'deciding whether Wright is Satoshi Nakamoto, the creator of Bitcoin'. '' His attitude did not give me the impression that he was telling the truth. '

`` It doesn't matter whether Wright's list is genuine or fake. It is important to note that this case involves a trial of a man who stated that two judges were 'liars'. Wright will open a new Pandora box, but I don't think the turmoil will subside. '