It turns out that the brains of babies and adults 'synchronize when playing together', and babies can lead adults 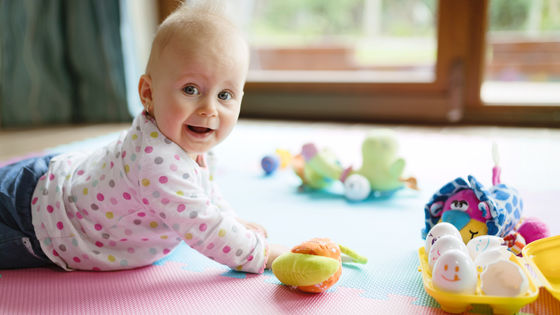 A research group led by Elise Piazza of the Institute of Neuroscience, Princeton University, found that the brains of babies and adults playing with them were in sync.

Piazza et al. Attached a functional near-infrared spectroscopy (fNIRS) measuring device to the heads of infants and adults and conducted experiments to scan the brains of both communicating. Forty-two infants and one adult participated in the experiment, but three of them did not wear a measurement headset and were excluded from the experiment. In addition, since 21 people moved too much during the experiment and were not measured normally, the data of 18 infants were finally used.

The experiment was conducted in two parts. In the first experiment, infants and adults communicated with each other for five minutes, playing with toys, singing songs, and reading a picture book called 'Good night Otsukisama.' In the next experiment, the infant played with his or her parents, and the adult participants also turned away from the infant and talked to another person. Analysis of brain scan results after the end of the experiment showed that in the first experiment in which infants and adults communicated, the brain activities of both tended to be synchronized, while the second one was pointing in a different direction. Experiments have confirmed that this tendency is not seen.

In addition, the research group found that the infant's brain can 'lead' the adult's brain for a few seconds. From this, collaborator Casey Lew-Williams said, 'Baby not only passively accepts communication, but also leads adults by what toys to play next and what words to say next. It was suggested that there may be cases. ' 'It seems that babies and adults in communication form some sort of feedback loop, for example, the adult brain predicts when the baby will smile,' Piazza said. Babies also predict what words adults will say, and as a result, the synchronization of their brains has emerged as a common gaze and interest in the same toys. ' Pointed out that the infant's brains are influencing each other.

In the future, the research group will investigate the relationship between early language learning of preschoolers and the function of the brain, optimize educational methods that enable educators to deal with diverse children, and atypical development such as autism. The idea is to elucidate the mechanism by which children's communication breaks down.