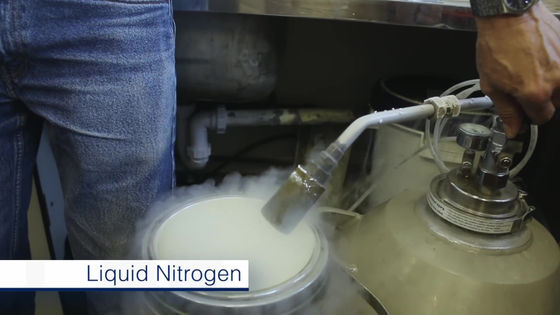 Many people have done experiments in science classes that cause an explosion by reacting hydrogen and oxygen. However, when it comes to dangerous elements and rare elements that are difficult to obtain, we cannot experiment with them. Therefore, scientists at the University of Nottingham in the United Kingdom have released a movie of experiments and explanations on the theme of all 118 kinds of elements including rare elements that are not normally available.

The Periodic Table of Videos --University of Nottingham

When I accessed the 'The Periodic Table of Videos' page above, the periodic table was displayed like this. movie of hydrogen with atomic number 1 was posted in June 2008, and finally covered 118 elements, but the latest experiment after that Keeps updating. The element with the purple bar is the element where the latest movie was posted, so first click on the argon indicated by the element symbol Ar. Since it will transition to the individual page of Argon, play the movie immediately.

You can watch the same movie from the following.


When the movie started, Martin Poliakov, a famous professor at the University of Nottingham, appeared. This time, he will conduct an experiment to liquefy transparent and invisible argon gas. The first thing I prepared was liquid nitrogen to cool the gas. 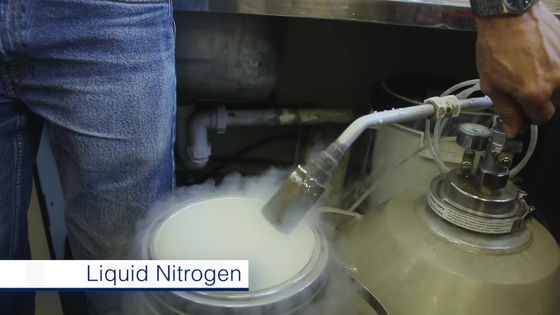 When a coil made of a metal tube is cooled with liquid nitrogen ... 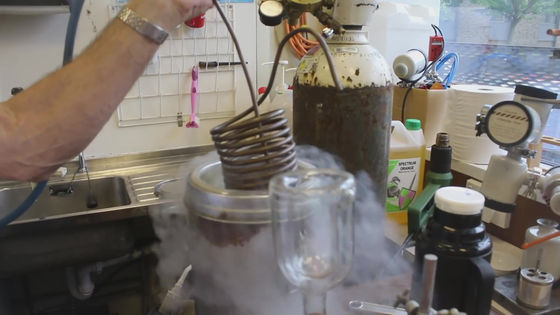 Liquefied argon gas came out from the tip of the metal tube. Argon gas has a boiling point of -185.85 degrees Celsius, so when it is cooled to a very low temperature with liquid nitrogen, it finally becomes a visible liquid. 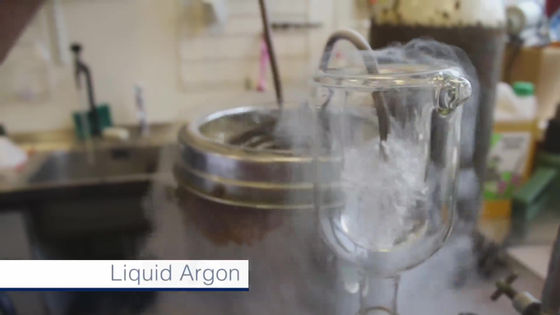 When I took the coil out of liquid nitrogen, liquid argon spewed out. 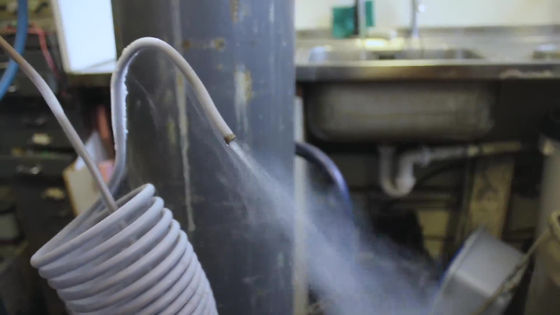 Argon is a gas that is also used for When argon gas is sealed in a transparent glass tube and an electric current is passed through it, it emits a beautiful blue glow as shown in the image below. In addition, argon gas also has a very low thermal conductivity, so if you confine the argon gas between the double-glazed windows, it will exhibit high heat insulation. .. You will be returned to the web page. In a movie about

cesium (Cs) with atomic number 55, a large-scale device is used to explode cesium in water. You can see the experimental movie using cesium from the following.


Even Mr. Polyakov, who has a lot of experience, said, 'I have never seen the reaction between cesium and water.' Therefore, the movie production team will try dropping cesium into the water. First, prepare a glass tube sealed with 1 g of cesium ... 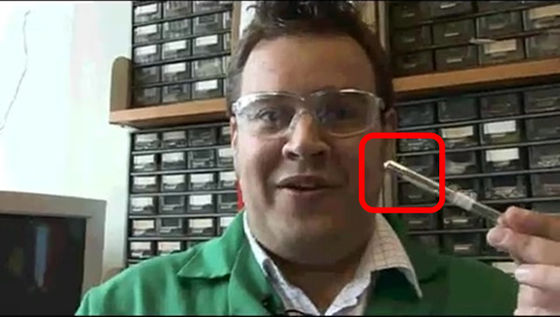 We have created a handmade 'remote control device' that can destroy the glass tube from a distance by pulling the head of the hammer with a thread so that it is safe even if it explodes violently. 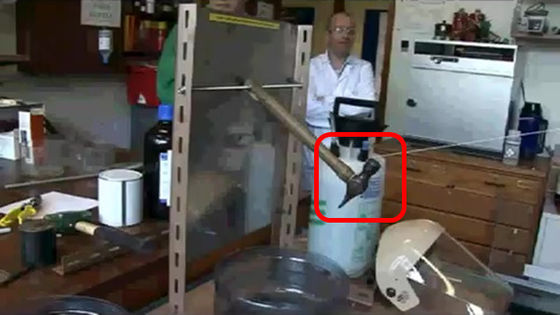 We will carry out an experiment in which a glass tube containing cesium is attached to the device, crushed with a hammer, and dropped into a bucket containing water below. 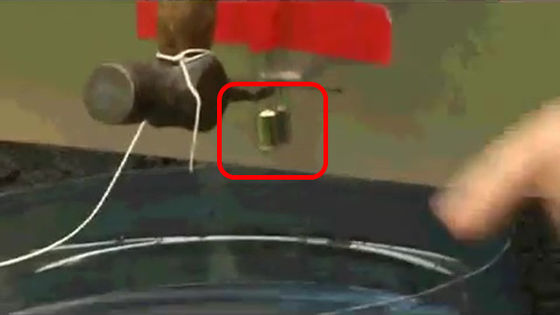 As the glass tube did not break easily, I tried several times and succeeded in dropping cesium into the water, but the reaction between cesium and water was a small fire with a squeaky sound. It just comes out. 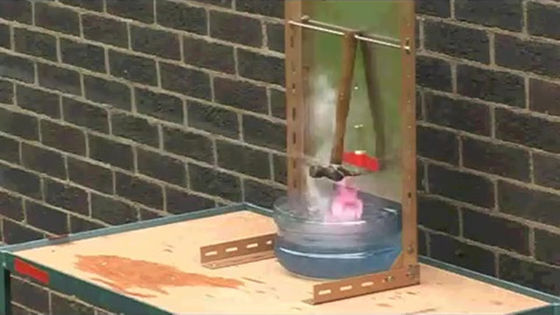 Surprisingly, Mr. Brady Haran, who led the movie production team, and the students who were watching were laughing. 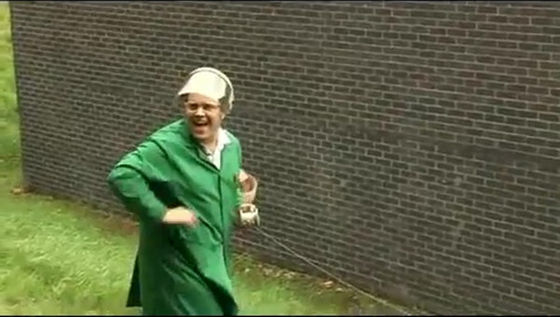 The element with atomic number 113 and element symbol Nh is The movie of Nihonium is from the following.


Since the average lifespan of nihonium is as short as 2 milliseconds, it is impossible to obtain it and conduct experiments. Therefore, this time, Mr. Polyakov, who wears a happi coat with the periodic table of elements, will explain about nihonium. 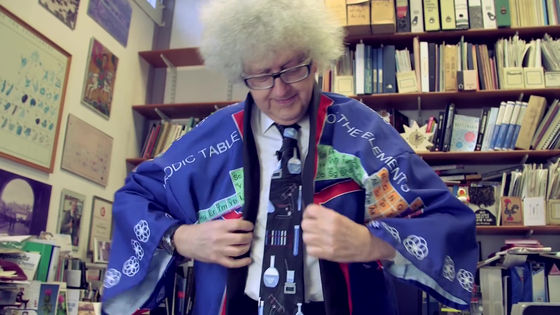 Nihonium is an element discovered by experiments that irradiate 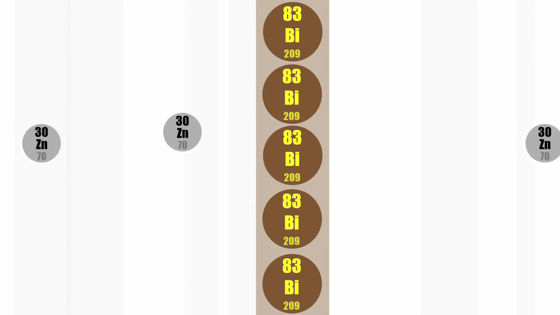 Group 13 element like boron and aluminum, and is located just below thallium , which is known to be extremely toxic, but its material properties are unknown. 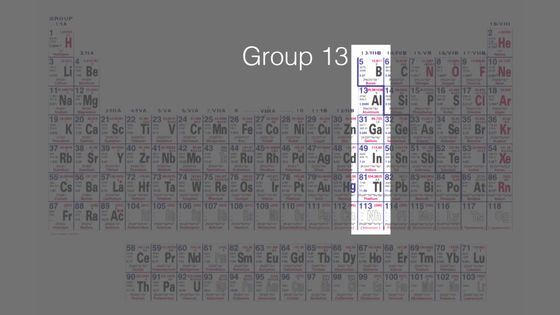 At the time of February 2016, when the naming rights for nihonium had been taken up, Mr. Polyakov came to Japan and met with scientists from the

Institute of Physical and Chemical Research (RIKEN) to talk about newly discovered elements. What Mr. Polyakov has in his hand is the presentation material handed over at that time. 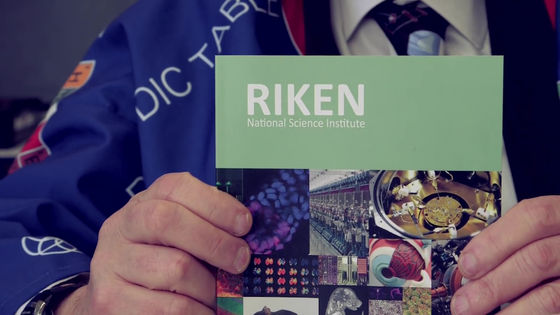 'I think Nihonium, discovered by Japan and confirmed by the German and Russian teams, is a good example of international cooperation,' said Poliakov. In addition, on YouTube channel Periodic Videos of Mr. Polyakov et al., You can see not only movies focusing on specific elements, but also various movies on the theme of chemistry, such as experimental movies of dipping cheese harger in hydrochloric acid. I will.