Observed the strongest “gamma-ray burst” in the history of observation, presumed to be caused by the black hole of a star 100 times the mass of the sun The largest “ gamma-ray burst ” in observation history was observed in July 2018 and January 2019. The gamma ray burst observed in January 2019 is the strongest in the history of observation, estimated to have occurred when a star with a mass 100 times that of the sun located 4.5 billion light years ahead collapsed into a black hole It has been.

Gamma ray burst is a phenomenon in which gamma rays are emitted like a flash over a period of seconds to hours. Its power is described as “the sun emits light in a few seconds in a lifetime” and is said to be “the largest explosion phenomenon in the universe”.

Gamma-ray bursts are observed several times a day, but are extremely difficult to observe with optical telescopes and Cherenkov telescopes with limited field of view. For this reason, it has been speculated that the cause is `` produced by combining celestial bodies such as neutron stars and black holes '' and `` produced due to gravitational collapse of massive stars '', but many of them are still mysterious. It remained.

Gamma ray bursts are explained in detail in the following articles. 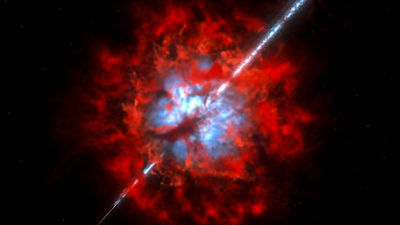 Two of the largest gamma-ray bursts in history have been observed, one of which was observed in July 2018. This gamma ray burst is powerful enough to detect afterglow for 10 hours after it has emitted high-power light. Even the photons contained in the afterglow had energies from 100 GeV to 440 GeV, which drastically changed the previous observational record of 95 GeV (giga-electron volts).

However, the gamma-ray burst that occurred on January 14, 2019 attracted much attention. International collaborative research teams such as the University of Tokyo, Kyoto University, Tokai University, and the German Max Planck Institute of Physics (MPP) that received an emergency alert from NASA's gamma-ray burst observation satellite Neil Gerrels Swift and Fermi Gamma-ray Space Telescope , We succeeded in observing more than 200 high-energy gamma-ray photons up to 1000 GeV in 10 seconds with the MAGIC Cherenkov telescope installed on La Palma, Canary Islands. Observed gamma photons have about 100 billion times the energy of visible light. In addition, this is the world's first observation of the gamma-ray burst phenomenon using the Cherenkov telescope on the ground. The research team also integrated observations from other optical telescopes, and this high-energy gamma-ray emission was released from a celestial body 4.5 billion light-years away. Presumed to have occurred when it became a black hole. A series of research results was published in Nature on November 20, 2019.

The Institute for Cosmic Ray Research, the University of Tokyo also makes its own presentations on research results. The research team stated that this result supports the significance of the Cherenkov Telescope Array, which builds 118 telescopes for observing gamma-ray objects in the northern and southern hemispheres. Neutrons emit gravitational waves. He says that it will lead to the advancement of multi-messenger astronomy such as the coalescence of stars and black holes.