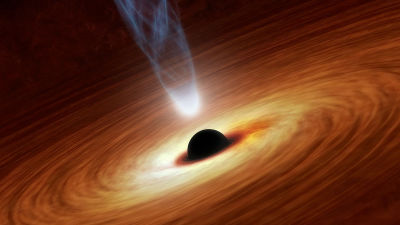 A photograph of the galaxy where there are two galactic nuclei located in the center of the rotating galaxy was taken by the Hubble Space Telescope and the W · M · Keck Observatory . This is a phenomenon occurring only when a galaxy and a galaxy collide and coalesce, and it is observed that two black holes grow rapidly due to existence of two galactic nuclei. 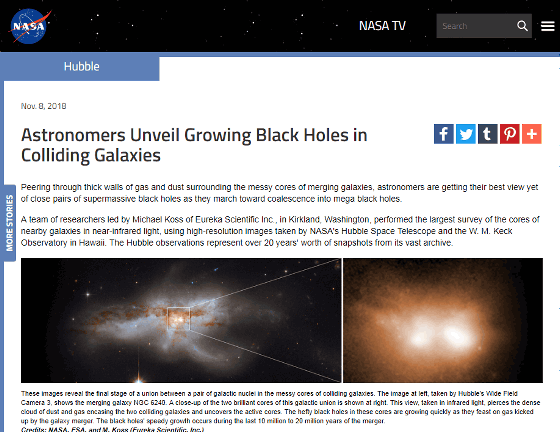 Collision between galaxies and galaxies occurs frequently in the universe. When a galaxy collides, the black hole releases enormous energy as a gravitational wave , and researchers have succeeded in observing this gravity wave. Because such collisions occur frequently in the early universe, such "galaxies with two nuclei" are also thought to occur more frequently.

Two galactic nuclei that are side by side are reflected in the following image.

Also, according to the results of this study, it was shown that the same thing could happen when our galaxy collided with the Andromeda galaxy . "Computer simulation of colliding galaxies showed that black holes grow rapidly at the final stage of collision coalescence. At this time two black holes interfere, we see the same observations as our observations "Laura Blecha of the University of Florida, one of the research teams, said. "The fact that the growth speed of the black hole will be faster as the merger of collisions is helped will help the understanding of how the black holes will be huge," Blecha said.

The process by which the two galaxies coalesce is very slow and is thought to require over a billion years. And before the final coalescence, many gasses and dust are released. The stripped substance covers the center of the galaxy to coalesce like a thick curtain. At this time, some substances fall to the black hole, black holes accelerate growth using these as fuel. The rapid growth of the black hole is thought to occur in the last million years to 2 million years when collision coalescence occurs and the photographs researched by the researchers are galaxies at this stage. The two black holes are only 3000 light years away from the distance.

It is not easy to find the two galactic nuclei approaching. The coalescence of the galaxies discovered so far was mostly in the early stages of black hole collision. The collision between the galaxies is covered with thick curtains due to gas and dust, so it is difficult to detect. This time, the research team was able to identify the position of the galaxy nucleus to coalesce behind this curtain by performing high resolution observation using infrared rays. First, the research team washfully investigated the X-ray data of the gamma ray burst observation satellite (BAT) for the past 10 years and searched for vigorous and visually blurred black holes visually. The gas around the black hole is emitting X-rays and it seems to know how fast the black hole grows from the brightness of X-rays. Although it did not seem to be able to discover whether it was able to find a truly hidden "colliding galaxy" at the beginning of the research, it is said from the result of computer simulation that the existence possibility of a galaxy covered with thick curtain was shown.

Researchers carefully investigated Hubble's archive and identified "conflicting galaxies" indicated by X-ray data. We made observations using the system of W · M · Keck Observatory. In this research it seems that removing the "curtain" using X-ray data and observing a wider range than ever was a key to success.

The two galaxies that have been discovered are expected to complete a collision in the next millions of years and produce a huge gravity wave.