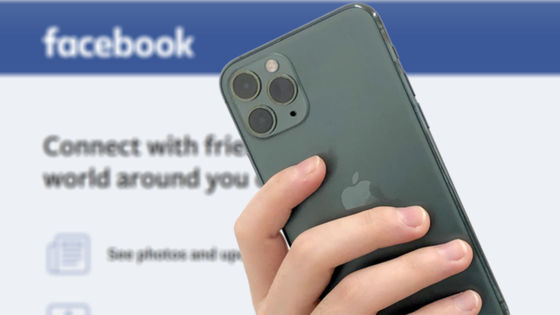 Facebook app for iOS, a bug that caused the camera to start without the user's knowledge in the background of watching videos and photos was discovered. Facebook has already reported that Apple has submitted a fix for this issue.

Facebook's iOS app might be opening the camera in the background-The Verge
https://www.theverge.com/2019/11/12/20961332/facebooks-ios-app-reportedly-camera-background-security

The bug was discovered on November 2, 2019, and software tester Neo QA has released a movie that reproduces the bug on Twitter.

Today, while watching a video on @facebook , I rotated to landscape and could see the Facebook / Instagram Story UI for a split second.When rotating back to portrait, the Story camera / UI opened entirely.A little worrying ... pic. twitter.com/7lVHHGedGf

To maximize the movie, lay the screen sideways.

Then, when returning the screen from landscape to portrait again, somehow the camera starts ...

The state of the room has been projected.

After a few seconds, the display returned to the timeline. Neo QA tweeted about this bug, 'I am a little worried ...'.

Other movies that confirmed camera malfunction due to the same bug are also available on Twitter.

On IOS App in with facebook 13.2.2 Opens My Phone'S Rear Camera When I Open A Profile Photo Swipe Down To Return (Look At The Little Slit On The Left Of The Video). Is This An App Bug Or An IOS Bug ?? Attofacebook Atto AppleSupport pic.twitter.com/WlhSXZulqx

According to web designer Joshua Madhu , the bug that the camera malfunctions occurs when running the application with the latest version iOS 13.2.2 at the time of article creation, which can be confirmed on iPhone with iOS 12 It was not there. Also, The Next Web , a technical media, reported no bugs when tested on iOS 13.1.3 devices.

Thanks for flagging this.This sounds like a bug, we are looking into it.

And Rosen said, “A bug was found that partially moved to the camera screen when a photo was tapped in an iOS app. There was no evidence that photos or movies were uploaded without permission. 'We reported bug fixes to the App Store today' and reported on Twitter.

We're submitting a fix for this to the App Store today.