AI “AlphaStar”, a big win over professional gamers, is promoted to “Grand Master”, the top 0.2% of humanity in “Starcraft 2” Announced that AlphaStar , a real-time strategy for Starcraft 2 developed by artificial intelligence (AI) company DeepMind , ranked in the top 0.2% of human players. DeepMind evaluates this as a “big achievement for machine learning” and says that applying similar technology may help solve various issues. 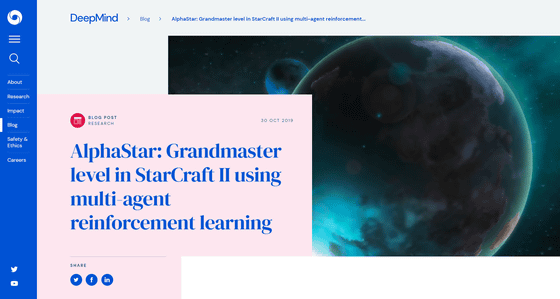 Google ’s AI company, DeepMind, has been collaborating with Blizzard Entertainment since 2016 and started developing “AlphaStar,” an AI that can play StarCraft 2. AlphaStar achieved the achievement of “Decisive 10 consecutive wins against the top human players” in January 2019. DeepMind lists the following four points to note about the new AlphaStar.

◆ 1: Let AlphaStar play under “more human conditions”
Until now, AI was directly reading and playing maps and data displayed on the system. However, under the supervision of Mr. Dario TLO Wünsch , a professional player of Starcraft 2, AlphaStar has restrictions equivalent to humans by watching the play screen through the camera and setting strong restrictions on the frequency of actions Is imposed.

◆ 2: Automated agent training
Until now, agents had to manually program some action sequences. However, the new AlphaStar announced by DeepMind has succeeded in automating agent training through multi-agent reinforcement learning. 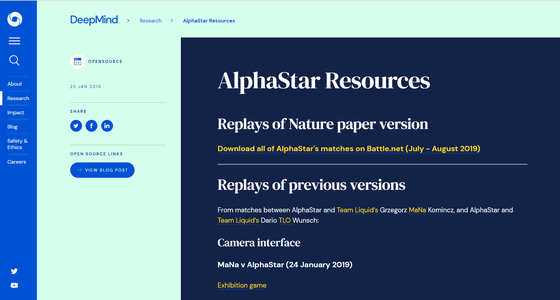 Dario TLO Wünsch, who actually played with the new AlphaStar, said: “AlphaStar's gameplay was very impressive. AI is very skilled in determining strategic positions, and engaging and unengaging with opponents. AlphaStar has the right control ability, but it doesn't feel superhuman, and of course not at a level that humans cannot theoretically achieve. “I felt like StarCraft was playing a game like a real person,” he said.

DeepMind says, “We are interested in understanding the possibilities and limitations of open-end learning. Open-end learning allows us to develop robust and flexible agents that can handle complex real-world domains. In games like Starcraft 2, players must use limited information to make dynamic and difficult decisions that affect multiple levels and time scales, so Starcraft 2 Is an excellent training ground to advance these approaches. '