Artificial Intelligence (AI) AI that DeepMind of companies have developed '

AlphaStar ' is, of Blizzard Entertainment real-time strategy (RTS) ' StarCraft 2 is a professional of the top players in the' TLO and Mr. MaNa to play against Mr., 10-game winning streak Achieved.

Traditionally, shogi and go have been used as one of the methods for testing and evaluating AI performance, but as AI performance increases, the games AI challenges become more complex. In recent years, AI that challenges RTS, which requires particularly complicated operations and information processing in games, has also appeared, and in June 2018 OpenAI 's AI `` OpenAI Five '', a non-profit research institution, The RTS “ Dota 2 ” won the topic of the human professional team and became a hot topic. 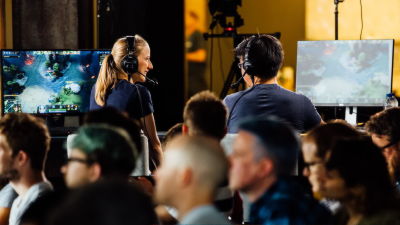 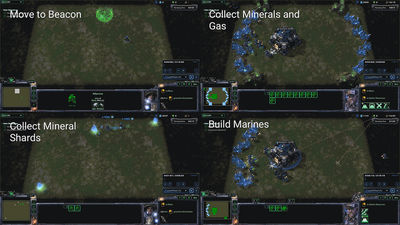 On December 19, 2018 at DeepMind's headquarters in London, AlphaStar will play a game of 5 battles against TLO Dario Wünsch, 42nd world pro player, and MaNa Grzegorz Komincz, 13th world player I did it. As a result, both TLO and MaNa lost 5-0, and AlphaStar decided to win 10 consecutive wins against the top human players. AlphaStar uses a strategy to deploy a tribal unit called 'Protoss'. Although it was a slightly advantageous strategy against Mr. TLO, AlphaStar performed 277 actions per minute, far less than the average professional player including Mr. TLO and Mr. MaNa thing. In addition, the AI reaction time is about 350 milliseconds, which is slower than most professional players. AlphaStar did not rely on the number of actions and reaction speeds at a level impossible for humans, but it was a victory by developing smarter tactics while thinking carefully and developing strategies. 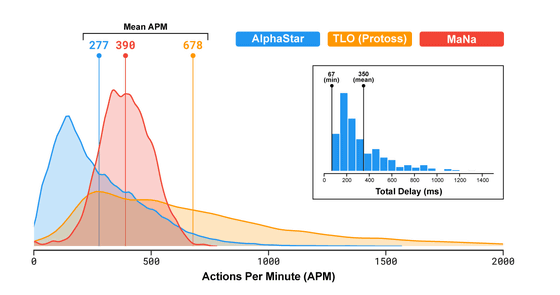 However, since AlphaStar is an AI that runs on a computer, it was receiving information directly from the Starcraft 2 game engine, unlike humans who are tracking the information of various games. Therefore, after the game held in December 2018, instead of receiving the data live, it seems that it has been upgraded to get information from the screen like a human using a camera.

The following graph shows AlphaStar's MMR (player rank shown in the game) according to training days. The red line is when the data is received live, and the blue line is after the camera has received the information. After the upgrade, the MMR was lower than before the upgrade, but after training, Mr. TLO on the 3rd day and Mr. MaNa on the 5th day were pulled out. I understand. 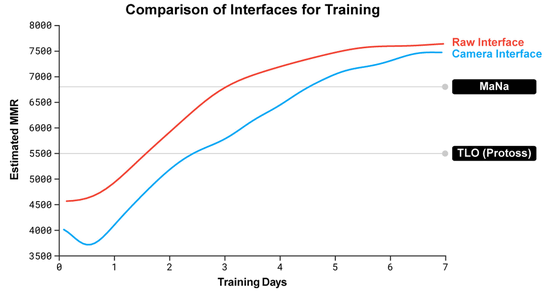 On January 25, 2019, the upgraded AlphaStar and MaNa exhibition match was broadcast live on YouTube and Twitch. AlphaStar did not play with humans after the upgrade, and MaNa won AlphaStar by piercing the hole. AlphaStar was the first professional player to lose in the 11th round.

This is it, ladies and gentlemen! For the first time in history a pro concedes to an Artificial Intelligence! GG WP @DeepMindAI ! #AlphaStar https://t.co/5VE3QQNqiw pic.twitter.com/0iQKT13dEA

TLO, who uses the same Protoss tactics as AlphaStar, said, “I was surprised by the strength of AlphaStar. AlphaStar embraced the well-known strategy I used, and I was devised. Showed a tactic that I had never thought of, which means that humans have not fully studied Starcraft 2 yet and that there is a possibility of new strategies. ' .

In addition, MaNa who took the first human victory from AlphaStar said, `` AlphaStar uses a very human play style that I did not expect, advanced movements and various strategies in the game Through the game with AlphaStar, I realized how my gameplay relies on forcing mistakes and exploiting human reactions. The battle of me has lit up the game with a whole new light for me. '

DeepMind says, 'AlphaStar's neural network can model a series of actions that select actions tens of thousands of times over a long period of time based on incomplete information' He states that a complex prediction model may be applied to various real-world issues such as weather forecasting, climate modeling, and language understanding.

In addition, you can watch the state of the battle between AlphaStar and LTO / MaNa in the following movie. The 11th game where MaNa won the game can be seen from around 2 hours 31 minutes 20 seconds .