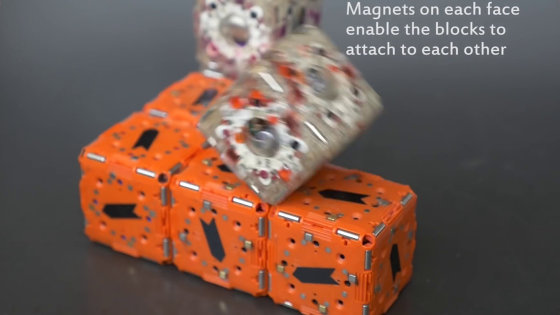 A robot that moves autonomously and changes its shape is one of the things many people dream of that often appear in fiction.

Researchers at the MIT Computer Science and Artificial Intelligence Laboratory (CASIL) are working independently, with the cooperation of the National Science Foundation and Amazon's robot development department, and sometimes the parts change shape while flying in the air Dice type robot ' M-Blocks ' was developed.

MIT CSAIL's swarm of robotic cubes can shapeshift at will | VentureBeat
https://venturebeat.com/2019/10/30/mit-csails-swarm-of-robotic-cubes-can-shapeshift-at-will/

You can see how M-Blocks changes shape from the following movie.


M-Blocks is a modular robot that moves by itself and constructs objects. MIT Professor and Director of CSAIL Daniela Ruth explains the name M-Blocks as “M stands for Move, Magnet, Magic”. Each robot has the following dice shape. 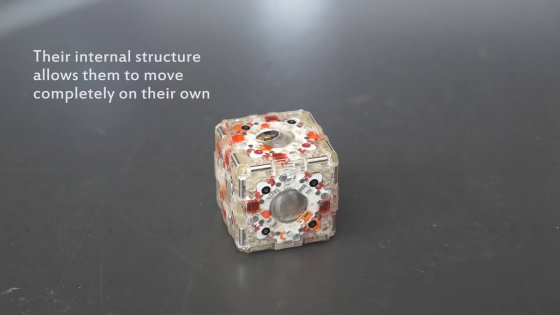 I started spinning with myself without any help. 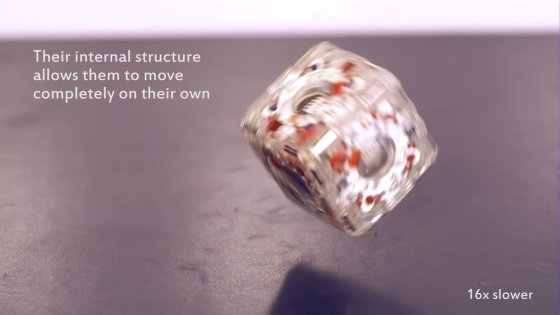 There are magnets on each of the six sides of the dice, so even if you move while rolling over M-Blocks ... 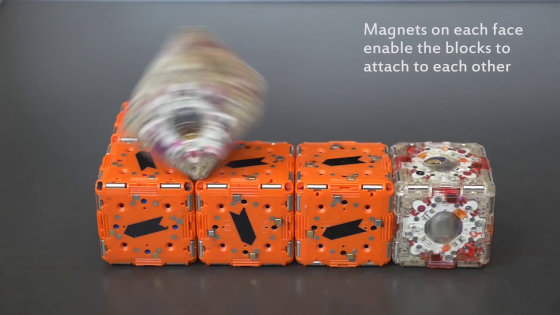 It sticks with the surface. The M-Blocks attached to the left side rolls upward ... It is also possible to move to the top of the structure. You can easily move against gravity. It looks like this when looking at the slow. The edges of the dice are bonded together ... Move on the dice regularly. 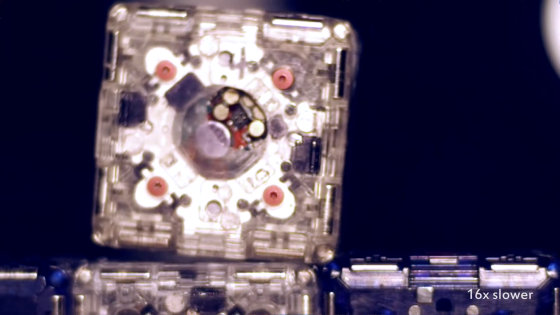 From a horizontal row ... 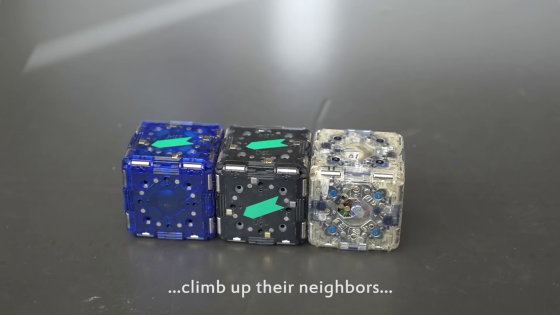 Quickly into an L shape. 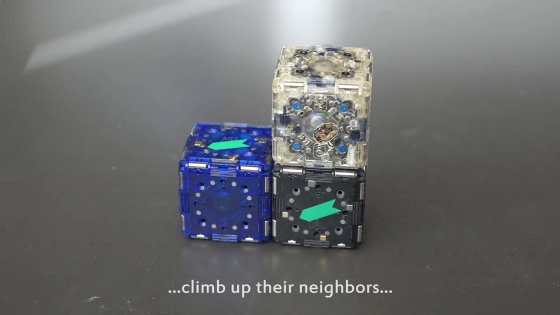 You can also move down as well as go up. Dice are slowly going down one by one without falling from the dice tower. 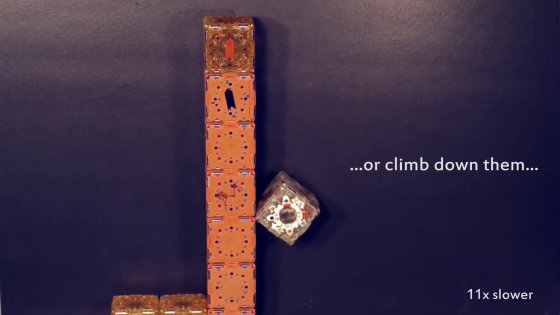 Furthermore, it is possible to jump over distance. 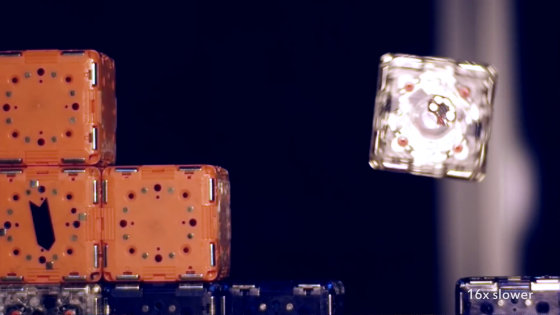 You can jump over the distance of three dice. 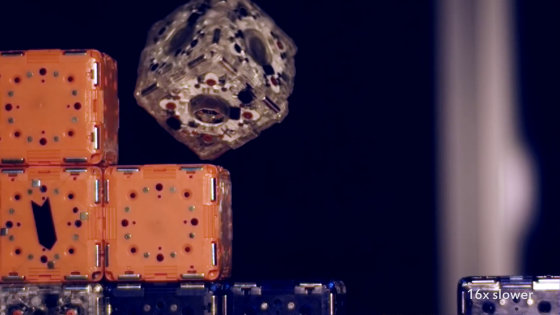 The dice are 50mm on each side and communicate with each other using something like a barcode called the 'MF tag' embedded in each face and edge. This communication makes it possible to move along the path. 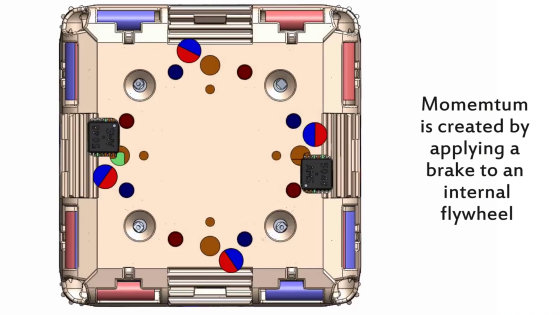 Inside, there is a part called “flywheel” that uses

angular momentum to rotate 20,000 revolutions per minute. Each of the six surfaces can move in four directions by the rotation of the flywheel. M-Blocks starts moving when the flywheel rotates, and the movement stops when the magnets stick together. 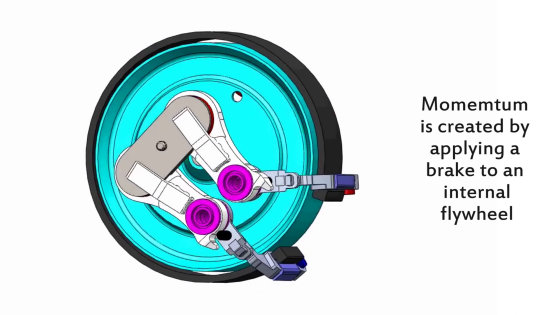 Through communication systems using MF tags, distant dice can find each other and stick together in one place. 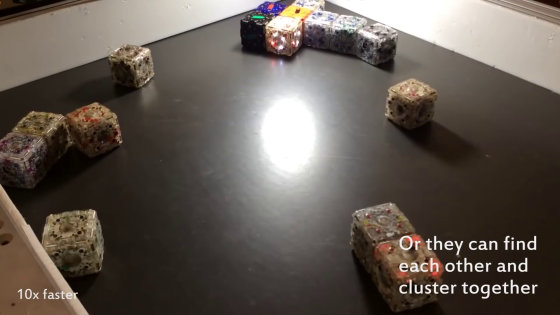 It is also possible to go in the direction of light. 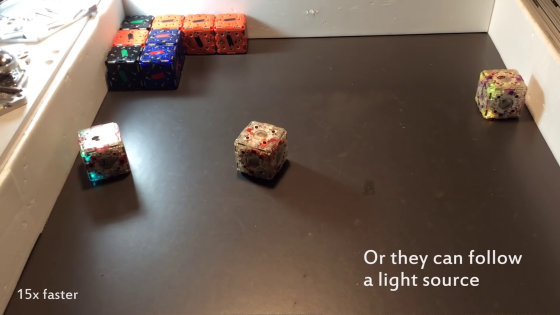 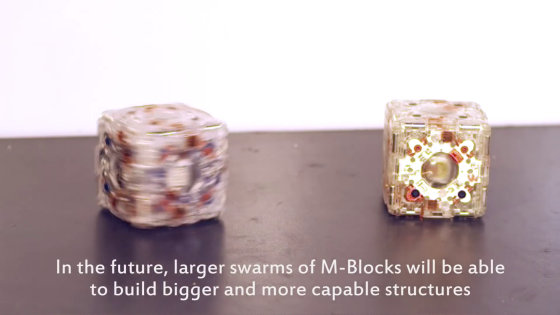 According to CSAIL's John Romanisin, M-Blocks is robust and inexpensive, and can be expanded to 1 million modules. In recent years, robot systems that have been developed have complex movement mechanisms, but M-Blocks is very simple to move, so it seems possible to expand the scale while keeping costs down.