The permafrost, which has been below 0 ° C for over two years, exists in Alaska and Siberia, accounting for approximately 20% of the northern hemisphere continent. It is reported that such permafrost is thawed by climate change and releases 1.7 billion tons of carbon dioxide annually.

In Alaska and Siberia, 'continuous permafrost' that freezes continuously for more than two years has spread. However, there is a problem that the continuous permafrost is melting due to global warming. It has long been pointed out that melted permafrost releases large amounts of greenhouse gases such as carbon dioxide and methane due to decomposition of organic matter by microorganisms.

It turned out that the amount of carbon released by melting permafrost was more than expected, affecting the global warming countermeasures-GIGAZINE 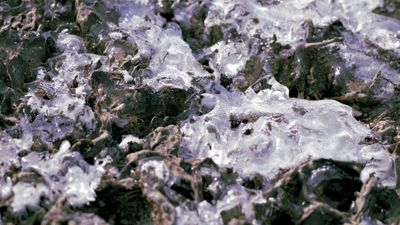 So 75 scientists from dozens of institutions in 12 countries installed monitors to measure carbon dioxide at more than 100 locations in the Arctic Circle and performed more than 1000 measurements. It turned out that far more carbon dioxide was released in the Arctic than previously thought. The amount released is 1.7 billion tons per year , which is about twice the estimated value so far.

In the Arctic Circle, it becomes a midnight sun every summer, and the sun shines in the sky almost all day. Therefore, summer is a growing season for Arctic plants, and a large amount of carbon dioxide is absorbed. Nevertheless, the total absorption is over 1 billion tons, resulting in the release of 600 million tons of carbon dioxide per year .