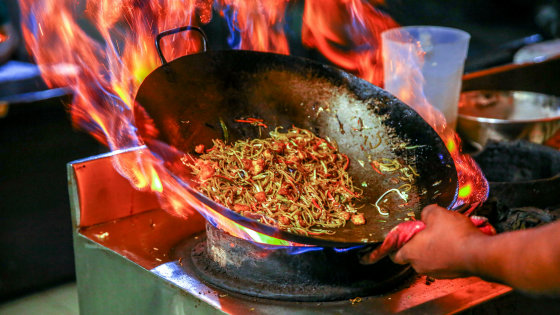 Recent studies have shown that enterobacteria are related to human health in many ways, including depression, chronic inflammation, and weight gain. In a new study, researchers at the University of California San Francisco (UCSF) and Harvard University confirmed for the first time that `` cooked food '' fundamentally changes the gut microbiome in humans and mice it was done.

Cooking shapes the structure and function of the gut microbiome | Nature Microbiology
https://www.nature.com/articles/s41564-019-0569-4

Cooking food alters the microbiome: Raw vs. cooked diets have distinct effects on both mouse and human gut microbes-ScienceDaily
https://www.sciencedaily.com/releases/2019/09/190930114546.htm

According to UCSF Associate Professor Peter Turnbau, while previous studies have investigated the effects of vegetarianism and meat-centered life on the gut microbiota, no one has examined the effects of 'cooking' itself It was never. Turnbau was very surprised when he noticed this fundamental problem.

In the case of meat, there was no change between heating and non-heating, but in the case of sweet potatoes, changes in the intestinal bacterial composition and gene activity pattern of the mouse and the products of intestinal bacterial metabolism were observed. In response to this survey, Mr. Turnbau and his colleagues also experimented with potatoes, corn, beans, carrots, beets, and other foods that were given to mice either heated or unheated.

Researchers have derived from a series of experiments that two factors are involved in changes in the gut microbiota. One is that by cooking, animals can absorb more calories and have less bacteria. Second, raw foods may contain substances that have antibacterial effects, which can directly damage bacteria. Researchers say that changes in intestinal bacteria are not caused by carbohydrate metabolism, but are 'caused by the chemicals contained in the plant,' the researchers say, and investigate other substances in the diet I showed the view that it should be. In the experiment, mice that were fed raw food lost weight. A researcher who thought that this cause was in the gut microbiota transplanted the bacteria of this mouse into a mouse eating a normal diet, and the contradictory result that `` the mouse comes to consume extra fat '' Was obtained. Researchers continue to investigate this point.

In addition, researchers are experimenting with whether the above research results apply to humans. The research team collaborated with a Harvard graduate student and chef who had a small number of subjects eat “appetizing, infinitely raw and cooked dishes”. The subjects continued to eat each dish for 3 days, after which stools were collected, indicating that the diet significantly changed the intestinal flora of the subject.

“It's interesting that the effects of cooking that were confirmed in mice were also related to humans. The effects of gut microbiota on humans and mice are different. 'I am very interested in observing and studying how long-term dietary changes affect humans,' says Turnbau.