A paper was first published in Nature Astronomy and others that confirmed the existence of “water vapor” in the atmosphere of planets in the “ habitable zone ” outside the solar system.

Planets in the habitable zone are considered to have liquid water, appropriate temperature, and sufficient atmospheric pressure, and water is indispensable for life activities, making it a `` planet on which life forms can be born '' It is. This time, water vapor was confirmed on the planet named “ K2-18b ” in the habitable zone. The mass of K2-18b is about nine times that of the Earth, about twice as large, revolving around the red dwarf , and is 111 light years away from the Earth. 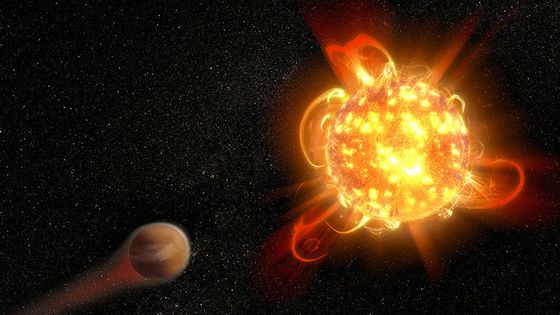 The first author of this paper, Angelos Tsiaras of University College London (UCL), UK, opened the rays that passed through the atmosphere of K2-18b, taken in 2016 and 2017 by the Hubble Space Telescope . Analyzed using the source algorithm, he announced that he discovered the molecular features of water vapor, hydrogen, and helium in the beam. The research team further stated that “molecules such as nitrogen and methane may exist,” but they have not been detected at this stage.

K2-18b is one of the “ Super Earth ” planets that are several times as large as the Earth discovered by Kepler . According to research team Ingo Waldmann, “K2-18b is considered to be the first discovery of a“ residentable planet ”in a giant terrestrial planet. Red dwarfs that emit light themselves like the sun in space are commonplace. Therefore, in future research, we believe that there will be an increase in the number of discoveries of “inhabitable giant terrestrial planets,” such as K2-18b. ”