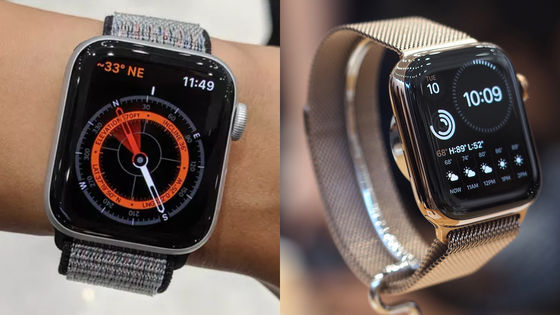 “The size and the digital crown are the same, Series 5 looks just like Series 4”, says The Verge, a technical media.

The image below is Series 4 on the left and Series 5 on the right. Even if it compares side by side, the difference in shape is not understood at all.

Always on display on Apple Watch Series 5 vs my series 4 pic.twitter.com/21WhIXRdlt

The sensor part on the back is also almost the same except that the letters engraved around the electric heart rate sensor are different. 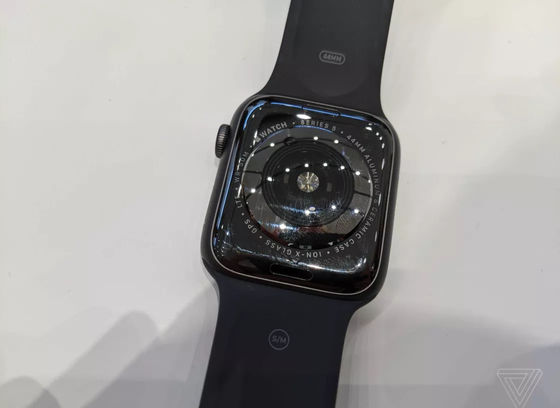 On the other hand, Series 5 adds some new features not found in Series 4. For example, Series 5 has further improved power saving performance and is equipped with a new optical sensor to realize an “always-on display Retina display”. “

Low-temperature polysilicon (LTPO)”, which consumes less power and extends battery life, has been introduced since Series 4, but is the first to display a screen at all times.

If you look at the following movie, you can see clearly what the retina display of Apple Watch Series 5 always displays. Up to Series 4, the screen was dark when in standby mode, but in Series 5, the watch panel is displayed with the backlight turned off even in standby state, and if you release the standby state by moving your wrist, The light is on and the clock is clearly displayed.

How the always-on display appears on the ceramic Apple Watch Series 5 #AppleEvent pic.twitter.com/dt5iff3zFK

By adopting a constant display Retina display, the battery of Apple Watch Series 5 has about 18 hours. However, The Verge says that you can't know how long the battery actually lasts unless you actually use it.

Series 5 is the first Apple Watch with a built-in compass. Direction, inclination, latitude / longitude, and altitude can be checked. This makes it possible to display your direction in the map app. You can also display a compass on the watch face. The following movie actually shows moving the compass on Apple Watch Series 5.

According to SlashGear, a technical media, the built-in compass means that the planetarium app “ Night Sky ” will operate as a constellation quick-view board on the Apple Watch Series 5. 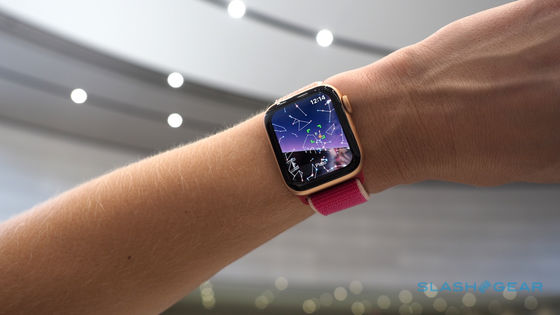 The following movie is where a reporter from GQ Germany, a German technical media, actually touched Apple Watch Series 5. While wearing the Series 5 on the arm, we are checking the appearance of the compass and constantly lit display.

From the data included in the public beta version of watchOS 6 , the next OS of Apple Watch, it was reported that models made of ceramic and titanium appeared in Apple Watch, but these models appeared in Series 5 It is. Titanium model and ceramic model appeared as 'Apple Watch Edition Series 5'. This is the ceramic model with a charm of 4 times the hardness of stainless steel.

Watch Series 5 Apple Ceramic. Same Material As Was Included Back With Series 3 But Now The Larger Form Factor (Introduced Last Year). Also, Notice How The Always On Screen Behaves In Order To Perserve Battery Life. Pic.Twitter.Com/KGdy0Rlwp3

Each ceramic case made of compression molding is white only.

And Apple Watch's first titanium model is twice as heavy as stainless steel. There are two types of cases: a silver-colored titanium case and a matte black space-black titanium case.