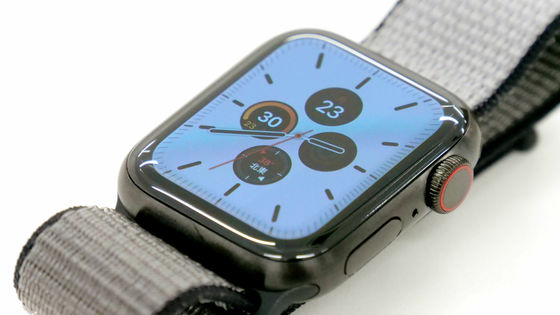 new product announcement event held by Apple on September 11, 2019, the latest model of the Apple Watch series ' Apple Watch Series 5 ' was announced. About four and a half years have passed since the first Apple Watch was released in April 2015, and I will immediately review how Apple Watch has evolved.

The outer box of Apple Watch has a horizontally long design. 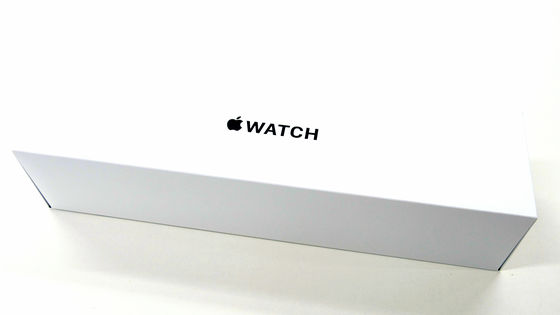 When opened, a box and band containing the Apple Watch itself are inside. This time I chose “Anchor Gray Sports Loop” as the band. 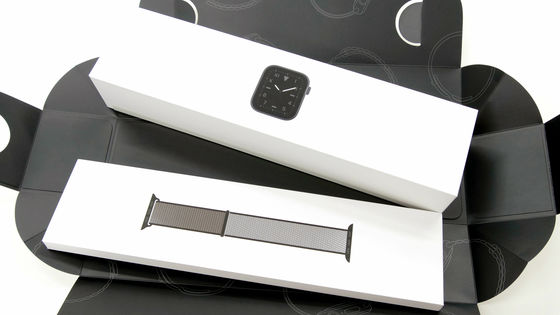 When you open the box, it looks like this. 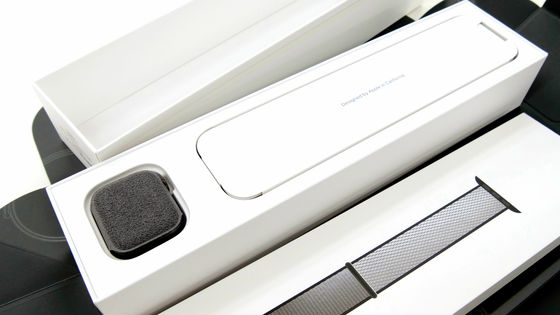 A small collection wrapped in brushed material is the main body of Apple Watch Series 5. 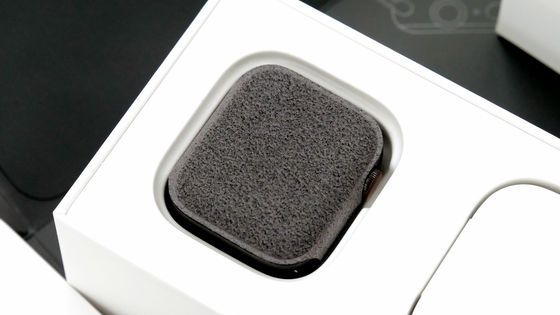 Glance from the package. 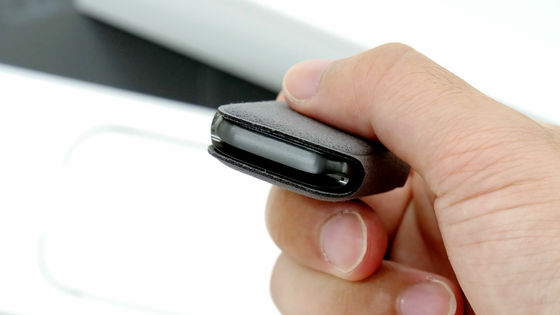 In addition to the main unit, there is a manual / magnetic charging cable and a USB power adapter. 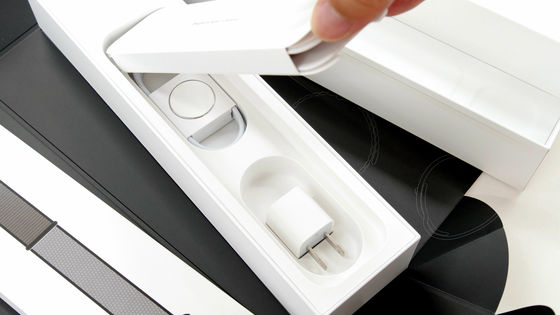 I thought that the manual was rather thick, and inside was a gray of “Sports Band” which is a dedicated band made of silicon. 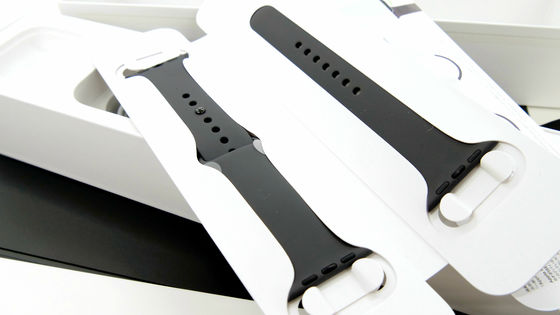 So, immediately take out the Series 5 body from the case. 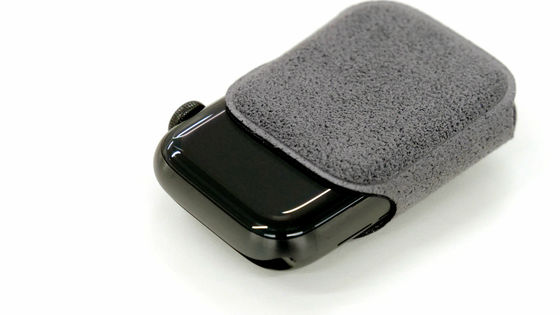 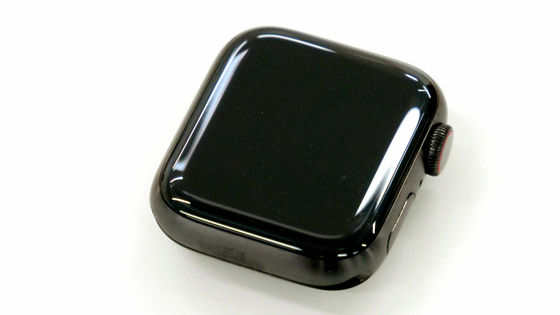 On the back, the model name is written in capital letters of the alphabet like this. Like Series 4, Series 5 is equipped with an electrical heart rate sensor (ECG) in addition to the optical heart rate sensor, but the ECG function cannot be used in Japan at the time of writing the article. 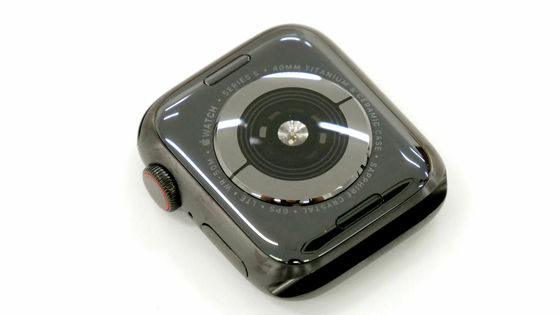 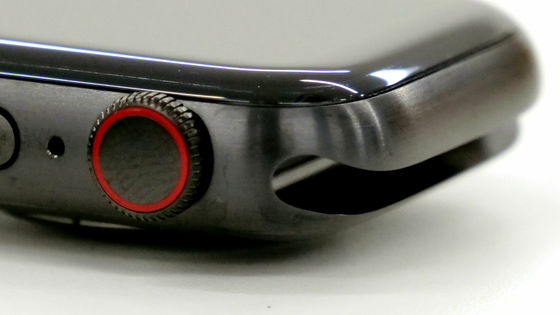 There are deep grooves on the top and bottom, and slide a dedicated band here. 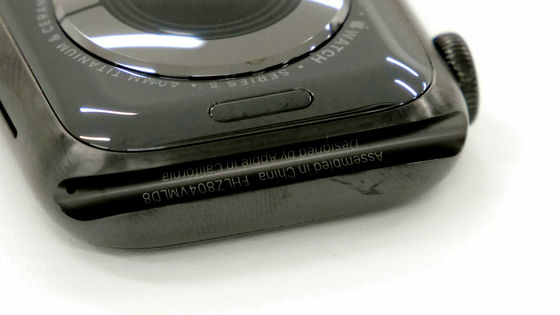 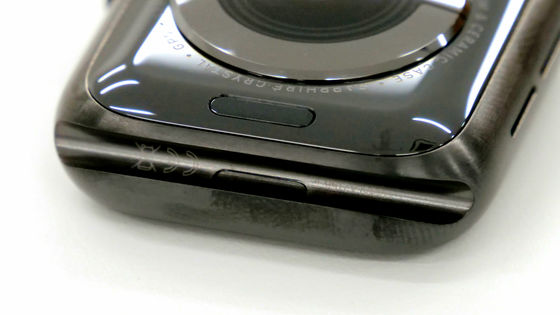 On the left side is a speaker groove. 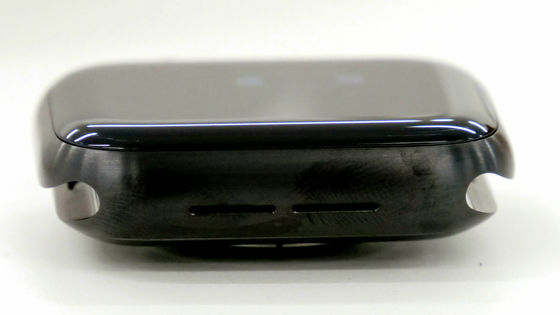 On the right side are side buttons and 'Digital Crown' from the left. The Digital Crown at the crown can be turned or pushed as a button. This design also has the same red line as Series 4. 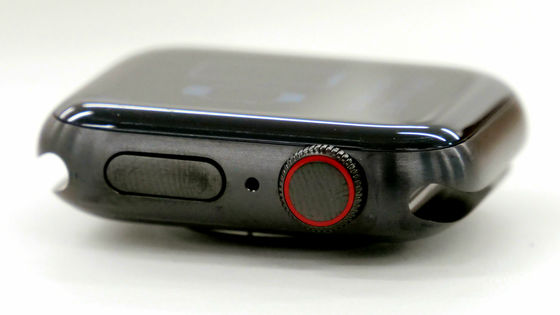 So, pair it with your iPhone. 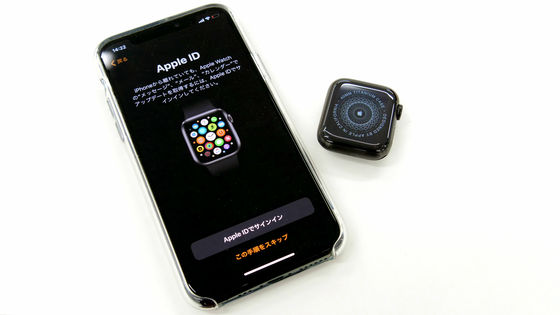 Until the pairing is completed, the name of each part is displayed on the display of the Apple Watch itself, so even those who have purchased the Apple Watch for the first time can know what buttons and operation systems are there before they start using it. 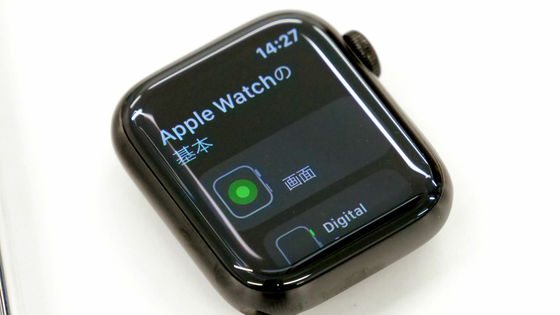 It is like this when wearing a band. A feeling of clock increases at a stretch. 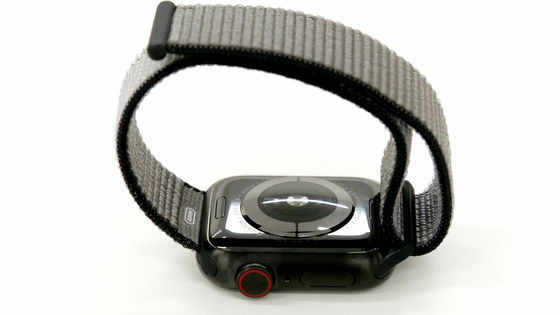 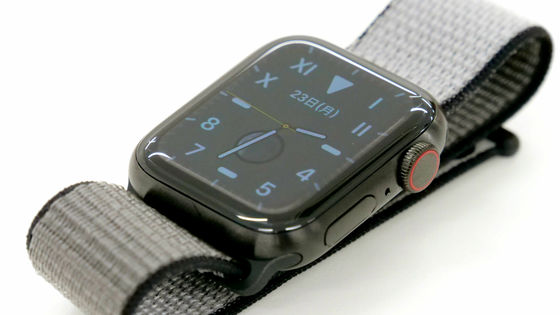 As the name suggests, the new feature “Compass” that can be used in Series 5 can show the compass on Apple Watch. It can also be used as a complication added on the dial. 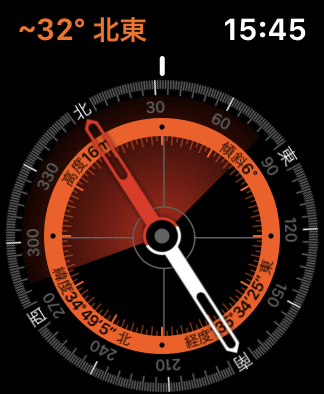 Next, select “Compass” in the “Complication” field where you want to place the compass.

Then, a compass appears in the red frame at the upper left of the dial as shown below. 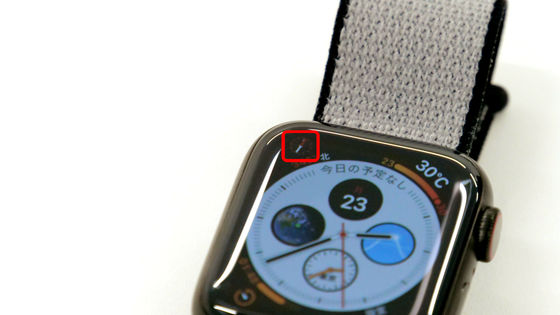 Since the complication display was too small, I tried adding a compass with another dial. The compass is in the red frame. Although it is not always necessary, it seems to be useful at a short time, such as “Looking for the North Exit at the station where you first got off”. 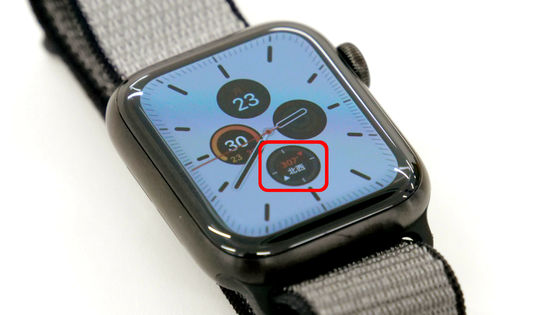 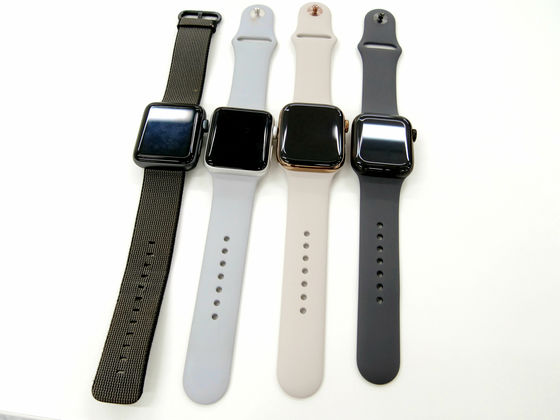 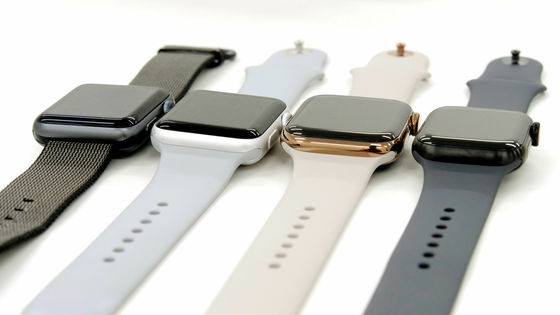 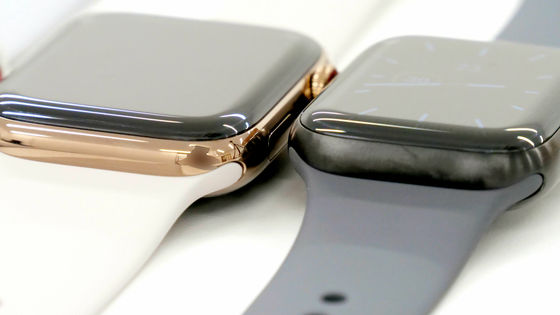 I tried to line it with stainless steel gold. Stainless steel is mirror-finished and the reflection is intense, so I personally feel that titanium looks more calm. 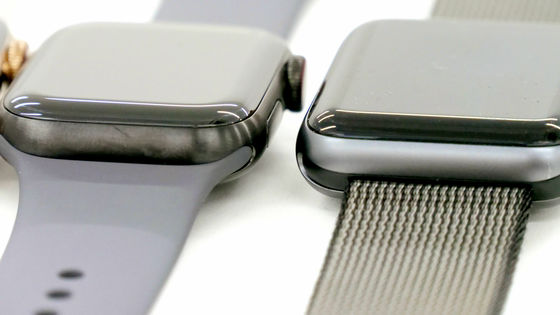 The official name of the Series 5 display is “LTPO OLED always-on display Retina display for pressure-sensitive touch”, and the dial can be “always-displayed” as its name suggests. Previous Apple Watch detected `` motion trying to watch the clock '' such as turning the wrist quickly and released the terminal from sleep state, but in Series 5 when Apple Watch is wrapped around the arm Will display the dial as shown below even when the user is not watching the watch. 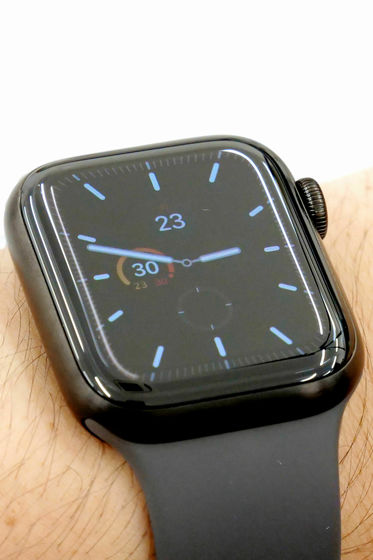 When “motion to watch the clock” is detected as before, the clock is displayed larger and brighter. When I tried it with various dials, it seems that the white area of the dial is black and the time display part of the clock is reduced during sleep to reduce screen brightness and battery consumption. 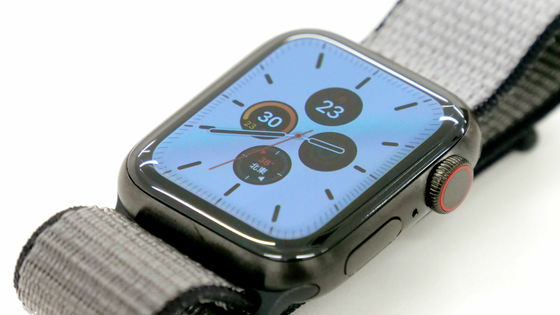 The following movie is a picture of how the Retina display always works with Series 5 actually wrapped around the arm.


In addition, even when Series 5 was turned on, the dial was not displayed during sleep if it was not wrapped around the arm. 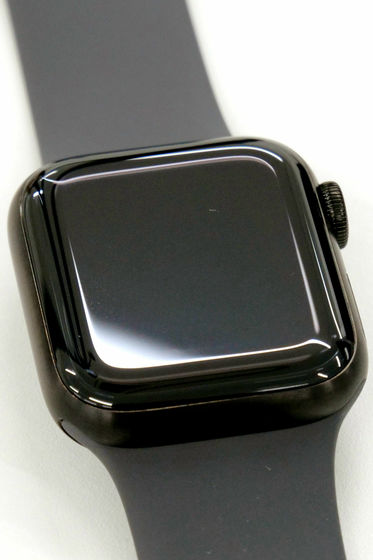 Series 5 uses a 64-bit dual-core S5 processor at the heart, which is up to twice as fast as the Series 3 S3 processor. However, Apple has announced that the S4 processor installed in Series 4 is 'up to twice as fast as the S3 processor', and the programmer who decrypted Xcode also said that 'Series 5 CPU and GPU are of Series 4 equivalent 'to the tweets . Overseas media also reported that “Series 5 S5 processor is equivalent to Series 4 S4 processor”. The Series 5 wireless chip is a W3 chip that supports the same Bluetooth 5.0 as Series 4.

Also, on the Apple's official ' Compare Apple Watch models ' page, the specifications of Series 5 are compared to Series 3, which can be purchased from 19,800 yen tax excluding Series 4, which is the previous model. The fall detection function, electric heart rate sensor, 2nd generation optical heart rate sensor, acceleration sensor of up to 32G, etc. that are not in Series 3 are appealing, but these are all features that already existed in Series 4 and Series 5 The features that Series 4 does not have include a compass function, a pressure-sensitive touch-enabled LTPO OLED constant display Retina display, and the main unit capacity has been increased from 16GB to 32GB.