It turns out that reading improves brain function Reading is an important way for humans to input new information into the brain. However, because the brain area is limited, and reading letters takes up much of the brain's resources, there are claims that gaining a lot of letter learning and reading experience is negative for the brain. A brain science researcher at the Max Planck Institute for Psychology and Linguistics has reported an experimental result that 'the visual function of the brain is rather enhanced' due to the effect of such reading and reading on the brain.

Brain scans reveal exactly why learning to read is good for the brain | Inverse
https://www.inverse.com/article/59385-learn-to-read-brain-changes

Letters are an important invention in human culture. Learning to read and write activates a region called the visual word shape area (VWFA) in the human brain, and the brain is said to be particularly sensitive to characters from visual objects. However, as VWFA expands, it occupies brain areas that can be used to process common visual objects such as faces, houses, and tools other than letters, so excessive reading is a human cultural activity Some people argue that it will have a detrimental effect. 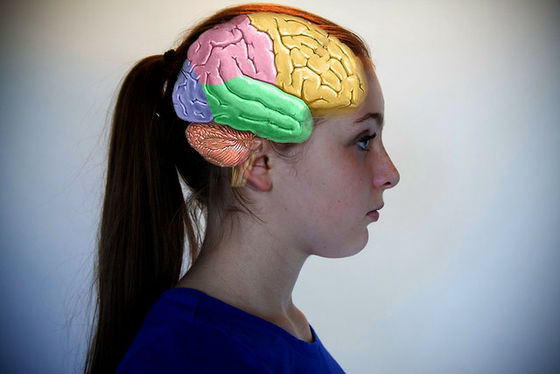 A team led by Dr. Falk Huettig and Dr. Alexis Hervais-Adelman at the Max Planck Institute for Psycholinguistics examined the brains of more than 90 adults living in northern India with functional magnetic resonance imaging (fMRI). Of the 29- to 35-year-old subjects, 29 were unable to read and write, and the research team enrolled them in a Hindi literacy training program for 6 months.

After the training program, the research team analyzed the subject's brain again with fMRI. By showing texts, letters, faces, and images of the house to subjects undergoing fMRI, 'How the brain has changed since learning to read and write', 'What changes have changed in other parts of the brain?' I gave it.

As a result of comparison with fMRI results of “persons who can not read and write and who have not received reading and writing training” and “persons who can read and write”, `` persons who could not read and write but became able to read and write by training ”Brain showed increased activity in a network that includes various parts of the brain in the occipital lobe, ventral visual cortex, inferior parietal, premotor and supplementary motor areas. This activation was also seen when showing images of faces and houses. In other words, reading does not adversely affect the response to visual objects that are not characters, such as the face and the house, but rather the reading is making the brain's response to general visual stimuli more sensitive. “When learning how to read letters, people use the ability of the brain to form category selection patches in the brain areas that control vision. The brain recognizes characters as special visual objects by means of category selection patches, “It works in the same cortical areas as other categories of expertise such as homes,” explains Dr. Hervais-Adelman. It is mainly the left hemisphere of the brain that is activated by reading characters and facial recognition, and it did not adversely affect other areas.

“VWFA does not erode the territory of its neighbors and is shared with the reaction area of other categories of visual objects.” “Learning to read is sensitive to the brain's response to visual objects and is generally positive for the visual system. Dr. Huettig insisted.