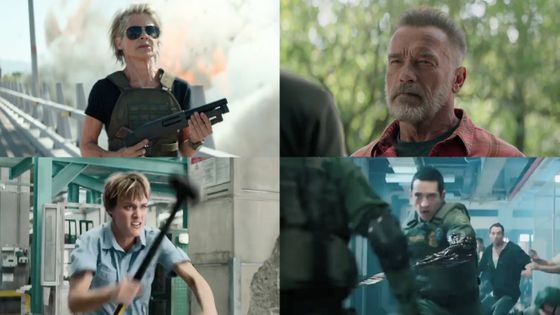 The latest trailer of '

Terminator: New Fate ', the latest work of the movie 'Terminator' series, directed by James Cameron , the creator of the series, has been released. This work is positioned as a valid sequel to `` Terminator 2 '', Linda Hamilton returns as Sarah Connor for the first time in 28 years, and Arnold Schwarzenegger has also appeared as T-800 , You can also see plenty of flashy action scenes in the trailer.

Sarah told me to talk first, but Grace responded with a superhuman movement ...

I pressed Sara against the wall. Grace says, 'That is the first.'

“I am Sara Connor,” Sara begins to monologize.

Skynet was supposed to visit Judgment Day with ego ...

Sara stops it. He said he changed the future and saved 3 billion lives.

But Grace is not happy with Sarah's explanation.

'You may have changed the future'

“But our fate has not changed.”

What came down to the ground naked ...

Grace encourages me by saying, 'I am here to protect you.'

Grace fights against Rev-9 in the factory.

Under the skin you can see something like a metal mesh. Grace argues, 'I just strengthened.'

Grace releases the restraint and beats the soldiers in an instant.

Sara answered, 'She is the same as me.'

What came out of the house Grace and Sara visited ...

Sarah has a gun unintentionally ...

Rev-9 trying to jump on the plane on which Sarah rides ...

Rev-9 pretending to be a soldier puts a weapon at the reception ...

“My whole body is a weapon,” laughs invincibly.

Laughing at the soldier who had passed through the metal detector, laughed “bad” ...

To kill all mercilessly.

We will revive Rev-9.

The body of Rev-9 was cut with a chain with momentum, and the face was also destroyed.

A car that Grace jumped off holding Ramos ...

Immediately after it exploded. Go through the deadline again and again.

You can also see the battle between old and new terminators.

Sara throws bombs under the bridge ...

say the familiar serif “ I'll be back ”.

Sarah walks away with a gun in her hand without an explosion.

“Terminator: New Fate” will be released in Japan on Friday, November 8, 2019.