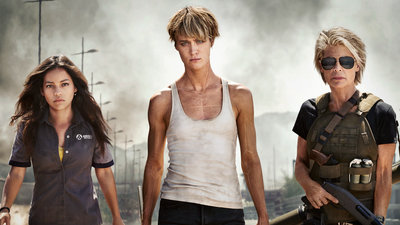 A visual of the latest work of the movie " Terminator " series which Arnold Schwarzenegger played a strong android popularized was first announced.

The published visuals are Natalia · Reyes who serves as Dani · Ramos, McKenzie Davies as Grace, Linda · Hamilton as Sarah Conner walk side by side. Sarah Connor is armed only with sunglasses. Schwarzenegger is looking forward to being able to play T - 800 (since "Terminator 2") James Cameron will supervise the whole, so it will be a great work. "

Director Tim Miller says "The film at the time is a prophecy" "Many things (artificial intelligence, robots, etc.) drawn with Cameron's" Terminator "and" Terminator 2 "are now realistic We are in there. "

This is the sixth work in this series, but it is said that this work will be treated as a sequel to "Terminator 2", and it is noteworthy what stories are spelled out at the original cast congregation for the first time in 28 years.