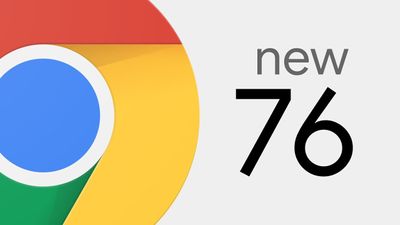 Version 76.0.3809.87, the latest stable version of the web browser Google Chrome, has been released

As was confirmed in the beta version of Chrome 76, it now blocks all Flash by default, as well as enhancing PWA related functionality.


◆ Flash is blocked by default
Before Chrome 75, the following confirmation dialog appeared when the web page tried to use Flash. 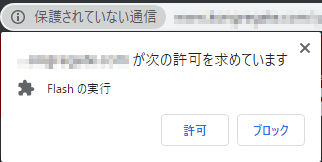 Starting with Chrome 76, the above confirmation will not appear and Flash will be blocked by default. It is possible to make the confirmation screen appear like Chrome 75 or earlier by checking the item 'Check first' in 'Settings' → 'Advanced' → 'Site Settings' → 'Flash' in Chrome is.

installed , the install button will be displayed on the right side of the address bar if it meets the requirements for becoming installable. In the past, it was necessary for the developer to install an install button on the web page, and the installation method was different depending on the site, but the appearance of this button enables the user to install in a more unified procedure. Become.


◆ We can adjust the appearance timing of 'add to home screen' bar
In the mobile version of Chrome, when the user accesses the installable PWA page, a bar 'Add to home screen' will appear automatically at the bottom of the screen, but from Chrome 76, the site operator is properly set It will be possible to adjust the appearance timing of this bar by doing.

◆ Update frequency of installed PWA has been improved
On Android, when PWA is installed on the device, Chrome regularly checks for updates, and updates automatically if there are any changes. The previous update check was performed every three days, but Chrome 76 and later has been changed to perform an update check every day.

◆ We cope with media query of dark mode
By using CSS media queries, site operators can display websites with different designs according to screen size and aspect ratio. Chrome 76 adds a query to determine if 'dark mode is enabled' and allows publishers to have a design for when the user is setting up dark mode.

◆ JavaScript related updates
Some experimental updates have been made to JavaScript in Chrome 76.

・ To make reading blobs easier
So far, when dealing with blobs in situations such as reading text files, a twist was required, such as using the FileReader's readAsText method. In Chrome 76, blob objects have been implemented with three methods, 'text', 'arrayBuffer' and 'stream', which can be handled more easily. These three methods are all asynchronous functions that return promises. 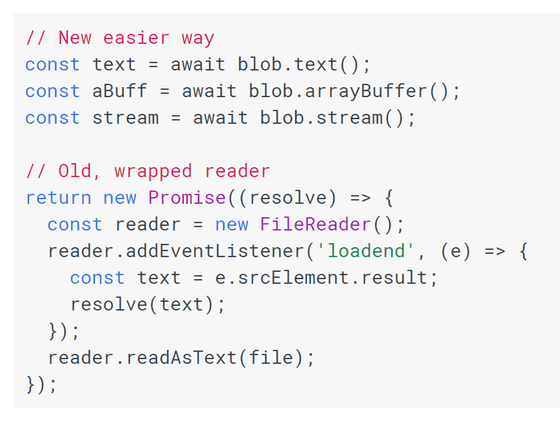 ・ Add image support by clipboard API
The clipboard API has been introduced in Chrome 66, which makes it easy to operate the clipboard from JavaScript. Starting with Chrome 76, its clipboard API supports image input and output, so copying and pasting images is easier.