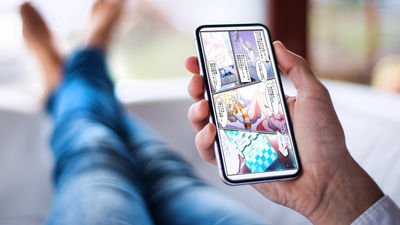 An e-comic containing the first episode of the manga ' Madosho Exchange Diary ', which depicts two girls involved through 'Madosho' where each other's thoughts are spelled out like an exchange diary, has appeared on Amazon's Kindle store. Whether you have already read the series or are new to the work, please take this opportunity to open the story of the two girls again. If you are a

Kindle Unlimited member, you can download it for free at any time. Also, the author's previous work ' Princess and Gamer ' is also half price at the special price for summer vacation, so please check that as well. Mel Curius:
All grades are at the lowest level, and exercise, music, art, sewing, and cooking are all useless. I think that making an effort is like 'practicing shooting at the goal of basketball 500 meters above'. My hobby was to write a diary that spelled out an unexpected event, but by chance I found a talent for 'magic' and was 'purchased' by Moshna. Silmar Li Lou:
A girl introduced as a 'sister' with whom Mel exchanges exchange diary. He has a personality that tends to pursue his ideals, and his emotions are extremely intense. He has good motor nerves and can handle anything, but he is not good at anything. While showing an innocent and friendly appearance, there are also scenes where you can see the shadow behind your eyes. Moshna Castle:
A witch who 'purchased' Mel and took her to another world. He has a mature personality and a caring person, and has a warlike strength. Moshna herself once had the experience of writing a spellbook exchange diary with her 'sister.' ◆ Language setting error and resolution
I

'm releasing a Kindle book from Kindle Direct Publishing (KDP), but this time I had a little trouble. I clicked 'Upload e-book manuscript' and uploaded the EPUB file of the manga ...

As you can see in the image, I got the error 'The language of the file does not match the language selected when setting up the book'.

When setting the book to be released on KDP, first set the language, but apparently the EPUB file of the manga is created with the English setting even though 'Japanese' is selected here. It seems to be.

The manga is created with

Adobe Indesign , but since all the pages are created with images only, the text does not exist in Japanese or English. Also, when I checked the character settings on the page, it was 'Japanese'. I got the exact same error when I created the English version of the work collection ' Light Painting ', but in that case I solved it by changing the character settings on this page. I didn't know how to check from Indesign, so I decided to check the contents of the EPUB file directly. Unzip the EPUB file and extract the file 'content.opf' with a text editor.

Then, I was able to confirm that the item of 'language' was 'en (English)'.

After rewriting from 'en' to 'ja (Japanese)', overwrite and save and recompress to EPUB file.

When I uploaded it again after doing this, the error was cleared and it succeeded without any problem. In addition, I used to create the '

Princess and Gamer ' comics using the same procedure as the same software, but at that time I did not see any errors when uploading.

If you know 'This error is this'm the cause!' Or 'you will not get an error if this set!' Is, by all means here and give me a tipster to.