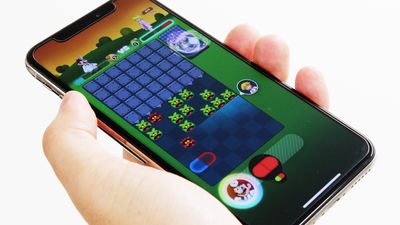 jointly developed by Nintendo with LINE, has finally been distributed. In the latest work of Dr. Mario , whose first series appeared in 1990, I played a quick game and tried to confirm its merits because a particularly popular puzzle game from smartphone appeared from Nintendo.

Doctor Mario World is released as an app for iOS and Android . This time, we will play in the iOS version. If you fly to the app page, tap 'Get'.

When installation is complete, tap 'Open'.

The following notification will be displayed at the first launch, so tap 'From the beginning'.

Suddenly, a large amount of viruses are generated all over the world, and both Kinopio and Kuppa corps are havoc. So Dr. Mario will appear and fight to kill the virus.

That's why the game started.

First of all, Kinopio briefly explains the rules of the game. There are various colored viruses on the game screen as follows.

In the game, the player manipulates the capsule and arranges three or more capsules of the same color and virus, it is possible to extinguish the virus. Capsules can be rotated 90 degrees by tapping.

In addition, since the capsule floats up in the purple play area, it can not move downward. You can move freely in the left and right and upward directions.

The capsule stops on the spot when it gets caught by a virus.

If three or more capsules & viruses of the same color are lined up, the virus disappears.

The capsule which left only one floated as it was, and I was able to put out the virus further.

The number on the upper right of the screen is the number of usable capsules. If the capsule does not meet the clear condition even if it becomes 0, the game is over.

At the top of the screen you will see the information needed to clear the game, including the number of viruses left.

That's why when you play it, it looks like this.

What happens when you play 'Dr. Mario World'-YouTube


In addition to this basic operation, various gimmicks will be added as the stage progresses.

For example, a rainbow capsule can be used when the rainbow gauges on both sides of the screen are stored. This is a special capsule that can erase any color of virus, and it comes out when you eliminate the virus or capsule seven times.

Falling among the yellow virus ...

He eliminated the virus at once.

In addition, if the same color appears three or more, it starts to move in the horizontal direction, 'Kora' or ...

There are bombs and the like that destroys the space around one square, and by making good use of these gimmicks, it will be possible to destroy the virus efficiently.

You can see how to use skills and Rainbow Capsule in the following movie.


You can use the following movie to check how viruses and blocks are being destroyed at once.


As you progress through the game, you will be able to use the help items as shown in the red frame. In addition, diamond and coin are necessary to use item.

The player can now choose which doctor to use at this stage. There are 'Stage mode' which has been played so far in Doctor Mario World and 'VS mode' in online battle mode, and the skill effects of each character are different in each. In 'stage mode', you will have the following skills but ... Skills change slightly in 'VS mode' as follows. If you go to stage 10, your account can be linked with your Nintendo account. Save data can be protected by linking accounts.

In addition, you can set a nickname here.

Once the data has been downloaded, support members will be available.

Kinopio gave me a Kribeau.

Set the support you got by tapping 'Character' at the bottom of the screen.

In Doctor Mario World, I set one doctor and two support.

Tap the '+' part at the top of the screen and tap the support you want to set. The set of support is complete.

Clearing to stage 20 releases all menus.

There are four released menus: 'Scout', 'Friend', 'Character' and 'VS Mode'. What has been played so far is 'Stage mode', and it is 'VS mode' that can be played online.

'Scout' is a so-called 'Gacha' element in which you can get 'doctor' or support at random by consuming 'Gold' which can be obtained by clearing the course or playing VS mode, or 'Diamond' which can be purchased for a fee. is.

From 'Friend', you can link Dr. Mario World with your LINE account. If friends can make it possible, you can send the hearts necessary to play the course in stage mode (one recovery in 30 minutes, up to 5 in stock) with your friends or play in VS mode It becomes.

In online battle mode 'VS mode', you can enjoy the match in real time with players from all over the world. The number '100' in the upper right of the screen is the so-called rate, which increases if you win the match and decreases if you lose it. As rates rise, you will be able to join higher leagues and earn more rewards.

Basically, the play method is the same as in VS mode, but it is possible to send a virus to the opponent's play area if the certain number of viruses are turned off.

When gauges in the red frame are stored ...

I will send a virus to my partner.

The amount of virus sent to the other party varies depending on the doctor used, and the numbers in the red frame part become the virus and attack the other party.

In VS mode, if you load capsules and viruses to the bottom of the play area, you will lose, and you will see how far the virus of the other party has come like the screen below.

So, when I actually play VS mode, I feel like this. The basic operation is the same as in the stage mode in the VS mode, but there is no limit to the number of capsules, and it is important to know how to erase many viruses and send them to the other party in a short time. Even the stage mode is quite different. It is finished in a very good condition even as a competition game, and those who feel that the stage mode is lacking are definitely recommended this VS mode.


When you actually play it, the stage mode is a long-playing game similar to a puzzle game for smartphones, in which the course is overwhelmed or the course is cleared by one person. You consume 1 heart to play 1 course, but if you clear the course you can get a heart and recover 1 heart in 30 minutes. In addition, you can ask your friend for a heart, so you can play bang in the early stages without worrying about the heart. The difficulty of the puzzle is quite easy in the beginning, but since all functions are unlocked and high difficulty courses etc. appear, so if you want more play and response, you can only clear the course anyway.

On the other hand, VS mode is an online battle mode, so there are opponents regardless of the rank, and viruses increase rapidly, so the level of difficulty increases. Match Play Immediate matching, you can play comfortably without lags, and you may forget that your opponent is somewhere in the world. Stage mode feels like 'we need the best operation with limited speed', but VS mode is important 'how to delete many viruses and send viruses to the other in a short time', so the operation and rules are almost same It feels like you're playing a completely different game, even though it's the same. Personally, this VS mode's performance is quite good, and while thinking that I should write an article soon, I think that it is finished in an addictive battle mode that I can not quit quite like 'one more battle! Another battle!' felt.