A tragic collector whose Pokemon card, which costs over 6.5 million yen, has disappeared during shipment 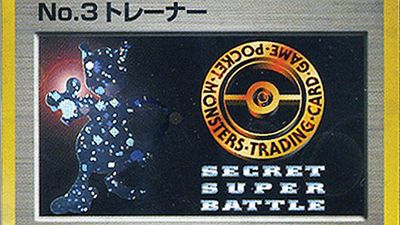 Pokemon Card Game ' is a trading card game (TCG) based on Pokemon, and is said to be Japan's first full-scale TCG. Such rare event of the Pokemon card game is lost during the transaction, smpratte who is also a famous TCG collector on YouTuber, has lost $ 1000 (about 110,000 yen), and the lost card is lost We are asking for information.

In the following movie, smpratte explains the details of the rare card that went missing during the transaction. As stated in the text that “I am certified here to be the third place finisher of the Pokemon card game official tournament and honor the honor”, it is not a card sold to the public but Tokyo in 1999 This card was presented to the third person in the official event “Secret Super Battle Japan First Decision Match” held in Tokyo.

PokeBeach , a fan site that handles Pokemon information, this card has only 12 cards registered in the appraisal service PSA such as TCG, and is one of the top rare cards among Pokemon card games. Because of its rareness, when this card was put up on the auction site eBay, it was priced as much as $ 60,000.

The seller, Pokemonplace, sent the card in the United States Postal Service (USPS) because the card was sold in August 2018 and then awarded to a collector living in New York. However, when the card was subsequently delivered to Dubai-based international shipping company Aramex in the United Arab Emirates (UAE), the tracking record was interrupted and it did not reach the successful bidder.

Mr. smpratte who consulted about this matter from the exhibitor, 'As both the exhibitor and the successful bidder are the famous collectors among card game fans, it is determined that either can not claim falsehood' . The cause is 'It is likely that either USPS or Aramex has been lost or someone has stolen it while in transit.' For example, the seller is insured at $ 50,000 (approximately 5.4 million yen), which is the maximum amount of insurance that can be applied to mail upon delivery to the USPS, and the package is expensive insurance Because they were labeled as valuable items.

The tragedy around the lost rare card is not over here. Although the seller is insured in case of emergency, this insurance is a USPS insurance system, so the insurance will not be applied after Aramex has signed the receipt. On the other hand, Aramex claims that 'I signed that I received delivery for a large amount of packages that had been transported in the same lot as the card, but there were no packages shipped by the seller,' The location of the responsibility remains unknown.

Mr smpratte has accused 'it is also a defect of eBay's Global Shipping Program (GSP), an international shipping program', but the parties including smpratte have not wanted any legal proceedings so far 'I just want to know the existence of this valuable card of historical value'. For this reason, smpratte has paid $ 1,000 (about 110,000 yen) for the information on the location of this card, and is collecting information widely.

In addition, Mr. smpratte warns the criminal who stole the card, 'Because each card has its own unique hologram processing, if you try to sell it to someone, you always have a leg' We are calling for an offer as soon as possible.