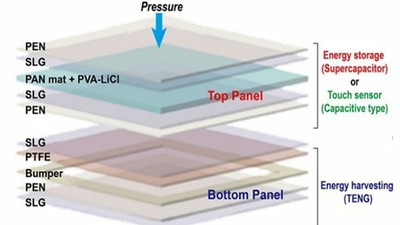 graphene ,” announced Daegu Kyungbuk Science and Technology Institute ( DGIST) in Korea. Being transparent, there is a possibility that it can be widely applied to what was difficult with conventional batteries, and its application to devices that can be attached to the skin is expected.

Graphene is a sheet-like material in which carbon atoms are combined to form a hexagonal lattice structure. The major feature of graphene is that the thickness of the single layer is as thin as about 335 pm (picometers), and its electron mobility is very high and its conductivity is excellent. Graphene is a dream material that is expected to be used in various fields, such as doubling battery capacity, doubling concrete strength , and desalination of seawater .

A research team led by senior researcher Changsoon Choi used a single-layer graphene film as an electrode to develop a transparent device. Graphene is highly opaque due to its electrical properties, but the research team has used polymer nanomats containing semi-solid electrolytes to increase transparency up to 77.4%, making it possible to see through landscapes and characters I succeeded in creating an electrode. Advances in technology have made it possible to print electronic circuits directly on the skin and to paste electronic circuits printed on extremely thin films. Further applications can be expected by combining the transparent battery developed this time with these technologies.

3D printer technology that can print electronic circuits on the skin appears, enabling soldiers to strengthen on the battlefield-GIGAZINE 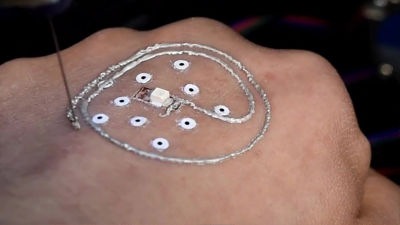 Choi said, 'Our research team was impressed by the transparent smartphone that appeared in the film and started this research. The cost of manufacturing is still high, and there is still a long way to commercialize it. Is a success in the field of transparent energy storage media, for which there has been no clear research experience so far, and we will do our best to continue and develop this technology. '