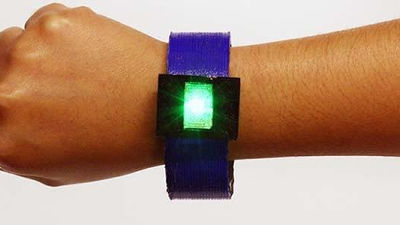 Technology was developed that enables us to output lithium ion batteries that can be used for all kinds of electronic equipment such as electric cars, smartphones, and laptop PCs in a free form using 3D printers. Conventionally, it was necessary to design the size and shape of the equipment according to the specifications of the lithium ion battery, but as it becomes possible to output to the free form with the 3D printer by the new technology, the electronic Equipment design is possible.

Although many conventional lithium-ion batteries have a predetermined size and shape, lithium ion batteries theoretically should be able to produce all kinds of things. Researchers Benjamin Wiley and Christopher Reyes wanted to develop a method to create lithium ion batteries of various shapes with an inexpensive 3D printer in order to solve the problem of such a conventional lithium ion battery It was. The point that becomes a problem is that the polylactic acid (PLA) material widely used in 3D printers is "not an ionic conductor". When outputting PLA with a 3D printer and outputting a lithium-ion battery, this PLA is not an ionic conductor, so it becomes a big hindrance to batteryization.

Meanwhile, Mr. Wiley and Mr. Reyes have successfully developed a method to create a lithium ion battery that can be outputted in a free form with a 3D printer. This method has been published on academic journal ACS Applied Energy Materials. 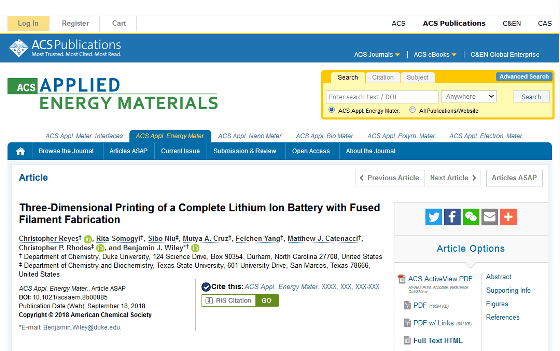 Two people are creating 2 ways to output lithium-ion batteries with 3D printers. One is an invention of a method of injecting electrolyte into PLA outputted by a 3D printer to increase the ionic conductivity of PLA. The other way is to incorporate graphene or multilayer carbon nanotubes into the anode or cathode to improve the electrical conductivity of the lithium ion battery. By combining these two technologies, we succeeded in 3D printing lithium ion batteries.

The following photo on the right is an LED bracelet powered by a 3D-printed lithium ion battery.

According to the researchers, it is said that the capacity of 3D printed lithium ion batteries made for the first time in research is about two orders of magnitude lower than that of commercial ones, and it can be said that it is still far from the practical stage. However, there are several ideas to increase the capacity of Battle, and it is suggested to change the PLA-based output material to another one.