Batteries utilizing paper and bacteria are being developed, activated by human 'saliva' "We used the power of bacteria" "paper-based" and "exhausted" batteries are being developed by research teams such as Seokheun Choi who are associate professors at the Department of Electrical and Information Engineering at State University of New York at Binghamton.

In a paper published at Advanced Sustainable Systems , Mr. Choi noted that while lithium-ion batteries and super capacitors have the advantage of providing high density energy and being able to be integrated into flexible, shape-changeable flexible substrates, We pointed out that there is a risk of damaging the environment because substances with high toxicity can not be used and it is used. Solar cells and nanogenerators have been proposed as environmentally conscious power generation methods, but they also contain heavy metals and polymers that are not renewable and can not be biodegraded.

Therefore, Mr. Choi's research team focused on the term "renewable", focusing on the material "paper". The research team utilizes state-of-the-art technology to change the thickness of cellulose fiber possessed by paper to smooth the surface of the paper and control transparency. By combining with various organic and inorganic materials, we developed "paper" as a next generation electronic engineering platform. Battery uses bacterial "cell respiration" to convert the biochemical energy of organic matter into biological energy. Specifically, the research team placed a freeze-dried "Exoelectrogen" (electrochemically active bacteria) on paper and created a battery. Exoelectrogen allows electrons to pass outside of their cells, and the electrons that have passed through the cell membrane come in contact with the externally placed electrodes, so the battery runs.

In order to activate the battery it is necessary to add water or saliva, and lab experiments have succeeded in producing a maximum output of 4 μW / cm 2 and a current density of 26 μA / cm 2. This number seems to be "remarkably high" compared to paper-based batteries developed in the past, but it seems that it has not reached the performance necessary for practical use yet. Mr. Choi says it will continue to make improvements for commercial use. 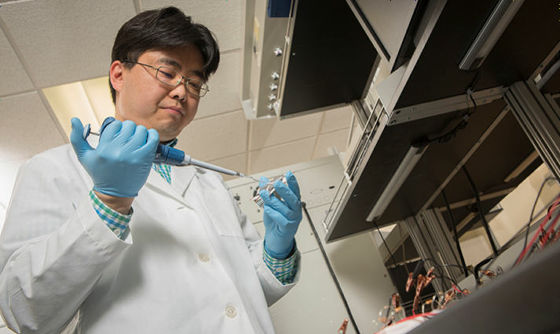 The point that this battery is superior is that series and parallel circuits are made possible by stacking and folding because the material is paper. It seems that the use of origami technology is also taken into consideration.

For the first time Choi and his colleagues published paper batteries research in 2015, they are also receiving 300,000 dollars (about 33 million yen) from the National Science Foundation. There are other researchers who are developing paper-based batteries, but the characteristic of the research by Choi et al. Succeeded in extending the shelf life to "4 months" by freezing the bacteria There is it. Because it is activated by the length of shelf life and "saliva addition" method, it is expected to be used in places without electricity and resources, and researchers are now looking for partner companies for commercialization I say that there is a place.