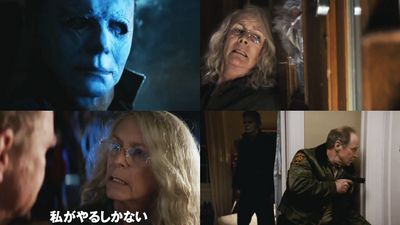 Halloween ', drawn 40 years after the horror movie ' Halloween ' and the sequel ' Halloween II ' where the murderer Boogieman goes wild, is finished when it sees ' IT / It' as R-specified horror movie . We recorded the opening box office income of the second place of the second successive generation in the United States. As a feature film of such 'Halloween', the figure of Bogieman who was released to the city after 40 years quietly and violently is exposed.


Children who walk while being dressed up in a busy town in Halloween. I'm looking for a house that asks for sweets next time.

Then I hit people who were standing on the road.

They are children who apologize obediently, but the man remains silent.

The white rubber Halloween mask worn by a man is from the murderer Boogieman who once caused a tragedy. This guy is Boogieman Michael Myers who came back after 40 years.

Backed by the songs of the children, Boogieman walks out into the garage of a home. You can see the figure of a woman in the back, but I have not noticed Boogieman.

Boogieman goes to the back without any hesitation ...

I took a hammer that was on the work bench.

A woman who continues cooking without noticing that Boogie Man is approaching.

A bogey man holding a hammer has invaded as if following the figure ...

What has been echoing is the dull beating sound of 'Got, Got' and the low voice of human beings.

And Boogieman, who showed up again, got a knife that the woman left behind. The beginning of the tragedy was very quiet and creepy.

And so far is the feature video. The second half is a trailer.

On Halloween night, children and adults who do not know that Boogieman has returned are walking around the town with a feeling of floating somewhere.

According to the men's words saying that 'this night the guy will appear,' Boogieman walks through the town ...

Once you find the target, with your knife in hand, quietly sneak up.

The shadow of Boogieman is behind the woman trying to lower the window blinds.

A boogie man stands right behind the woman ...

The screen screamed as soon as the screen went out.

Lowry survived the tragedy 40 years ago. It is played by

Laurie declares 'I can only do it' to men who warn 'He's too dangerous'.

Lowry who found figure of boogie man behind the window ...

Fire a gun. The 40-year-old battle has begun.

The hand extending from the gap at the top of the toilet spills something.

I saw a frightened woman ...

A woman who screams for fear.

Laurie, who was concerned about Bogieman's resurrection alone, mutters, 'A horrible thing happened.'

There is no place to escape from Boogieman safely ...

Lorie, who knows the dangers best, called on people to go home!

The men of the sheriff who fights with Laurie hold a gun and walk carefully.

The boogie man creeps in with no sound behind it.

It seems that they have been preparing for the battle with Boogieman for the past 40 years.

It breaks through the glass and gets caught by the arm that has been stretched.

The boogie man who does not show a feeling to wear a mask.