Julian Assange, the founder of WikiLeaks who has exposed a lot of sensitive information, is arrested WikiLeaks, an accused website that has released numerous confidential information, has been arrested. Assanji has been in exile in the Ecuadorian Embassy in London since 2012, but his relationship with the Ecuadorian government has worsened and is no longer protected, and will eventually be arrested.

Assange arrest: Trump claims to 'know nothing about WikiLeaks' despite past praise – as it happened | Media | The Guardian
https://www.theguardian.com/media/live/2019/apr/11/wikileaks-founder-julian-assange-arrested-at-the-ecuadorean-embassy-live-updates 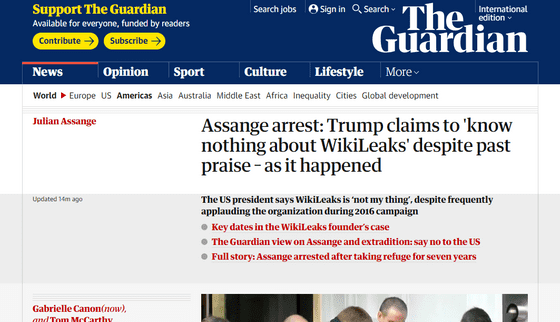 WikiLeaks is a site that publishes various confidential information provided by whistle-blowers,

and leaks documents from the US National Security Agency (NSA) in 2010, or “for the agent by the CIA in 2014. 'S Guidebook on Infiltration of Read the following articles to learn more about Wikileaks and Assange's motivations and goals.

Why are Wikileaks trying to turn nations around the world into enemies? -GIGAZINE Assange was arrested in the United Kingdom in 2012 for 'probation of sex crimes in Sweden'. However, they allege that the charges are an excuse to arrest themselves. Mr. Assanji was afraid to be charged with 'disclosing foreign classified documents' after being transferred to the United States, and fled to the Ecuadorian embassy in London while on bail, and continued to live in exile until April 2019. The

However, on March 26, 2019, WikiLeaks' Twitter account stated that 'President Maano of Ecuador is being investigated for corruption,' 'We are trying to sell Mr. Asanji to the United States to receive debt relief by the United States.'

The following day, Ecuador's Foreign Minister Jose Valencia commented that “This tweet is a foolish claim that hurts the dignity of the nation” on March 27 and criticized WikiLeaks's tweet, causing the relationship to deteriorate. On April 2, President Moano said, 'Mr. Asanji violates the conditions of exile' and 'Make a decision in the near future'.

The German news agency Ruptly includes the moment when Assanji is arrested.

Julian Assanji is taken out of the embassy surrounded by a number of men. It seems that something is screaming when being taken out. I was taken to the convoy as it was. WikiLeaks was arrested and said on Twitter: “This man is a son, father and brother. He has won dozens of journalism awards. He has been a Nobel Peace Prize candidate every year since 2010. Starting with the CIA 'They are trying to make him impersonal and trying to steal legality and imprisonment.'

He's won dozens of journalism awards. He's been abolished for the Nobel Peace Prize every year since 2010. Powerful actors, including CIA, are engaged in sophisticated activities. imprison him. #ProtectJulian pic.twitter.com/dVBf1EcMa5