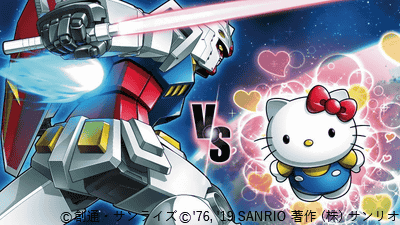 The “Hello Kitty”, which celebrated its 45th anniversary, the “Mobile Suit Gundam”, which is the 40th anniversary, and the “ Gundam vs Hello Kitty Project, ” in which two national characters face each other, were announced. At first Marugame Seimen from April 2 (Tuesday) to May 19 (Sun), 'Confrontation' will be held at Ito-Yokado specialty store street from May 1 (Wed) to May 6 (Mon) .

A book of action MORPG's 'Diablo', a game that shines in the history of games, is on display-GIGAZINE

At a Japanese confectionery shop that somehow stopped, I sold 'dough-baked with dry curry' and sold it twice, and despite the name being 'Indra' I laughed out in spite of having a glance at that spot ... Zulu ... pic .twitter.com / JNm1gph9KT

The shape of Hokkaido is amazing. I have no regrets, but I think that if this is a form of Tochigi, it can not be sold. pic.twitter.com/ogmF6ckeno

The bend of the wing is good, but the shellfish plays a leading role too ... pic.twitter.com/c2zwLbaMp5

I feel like I can not find any more hidden mickeys. pic.twitter.com/hSWSefYRYy

◆ Society, politics, economy (case, world news, business)
The prime minister and the former Democratic Party administration criticize, child allowances circulation “At that time, there are many who think that they are fools”-Mainichi Shimbun

It will not end if it is as it is now ... 'The documentary' of 'Moryu case'-YouTube

70% of job hunting students are away ... why 'hidden as a substitute for work' is rapidly increasing | Daily Gendai DIGITAL

High school students who are troubled, it is too early to choose 'Faculty of Psychology' |

Compact and beautifully housed in a narrow valley between mountains,
Takaoyama Interchange is an art. pic.twitter.com/mGUsiKC4J6

Several years ago, my grandfather was found to have cancer for several months. My grandfather sang when I had a meal with my relatives as my last memory.
'I want to go to the Hooters'
Everyone laughed loud and moved to Akasaka. This smile Taruya. After all, his grandfather lived a year and a half, and he died without suffering at the end of his life.
I do not laugh at the Hooters. pic.twitter.com/XwnCFCpaPk

I don't understand the meaning at all, but in the Fujino parking area, a Pakistani family suddenly called out 'Don't eat because I made Biriyani?' And I had a delicious chicken Biriyani as a feast. pic.twitter.com/IVJ79wQqyB

JIT can be used with PHP8-Qiita

I traveled with a friend I can not see today.

It is a play where a friend who is in his own room travels together while navigating by LINE call and Google map, while I am in communication restriction. I felt like I was traveling with the ghost, and I was so embarrassed that I could not talk to myself from the virtual and analog point of view. pic.twitter.com/ksCQTj4hhG

The story of 'Suggested for late reading'. pic.twitter.com/KfFs47DjhD


People who question the reputation of the Chemrixa and Takutsuki director are too high. 'The director's believer is too noisy' 'Tatsuki is not the director'-Togetter

【# ム ー ク リ 回 last-viewer】 “I was glad to believe in Tatsuki” Impressions and highlights of the final round. And plenty of fan art-Togetter

A story that declined to be animated. (Nanase summer door @ Nanase Natsuhi)-Kakyumu

Though it was 'Soloy Soyuz' which was released on December 15, 2017, there was actually an offer for animated theater. This is the story until we refuse it. It is not a disclosure or accusation, but a report to readers who have just supported.

It is good for men in the world to follow Vegeta pic.twitter.com/HO2s3H2J87

Many of the nerds can see what this figure is highly abstracted pic.twitter.com/b1aFnUgDbE

Huh?
'Humblebee' is not a movie like this ... pic.twitter.com/Ka7PJd3DxX

I said that Goku, which is DB super, because I like this kora made by foreign fans because it is sarcastic. Forgot the author. pic.twitter.com/sIsKs5VRS1

Life-size Canna! There is a powerful image pic.twitter.com/4uXuH6T392

We have drawn the concept escort 'Sasakami Sohana' at the FGO new event 'Tokugawa Saten Labyrinth Ooku' held from today! Because it is a Japanese-style dresser of the night castle of the corner and Mata Hari, it is not an ordinary Japanese style dress, but I put accessories or bangs and made it feel exotic ...! Thank you! # FGO pic.twitter.com/Z2Y2trNJvv

The new daddy's cartoon is too evil no matter how you look at it 2 pic.twitter.com/XcYmyfzHyt

A woman is such a skill value and good-looking pic.twitter.com/KRIKjhzRjM


TV Animation 'If it was for my daughter, I could possibly defeat the Demon King.告知 Animated announcement PV-YouTube

A highly abstracted startup screen that you can see if you are a retro gamer pic.twitter.com/kP1mDCmz7r

The story of a Bobcut woman giving birth to a virgin 1 pic.twitter.com/ql9c38B6lt

Pic.twitter.com/R48yGwsahV asked to be a live watcher

I was in charge of Kama at the FGO event 'Tokugawa Saten Labyrinth Ooku' held from today. Thank you in advance. #FGO pic.twitter.com/lOb0wPmO4N

Hoshi Hou · Hayashi Kazunari rages at the signature stealing of Narashino 'I have proof. I can show you here in the video' and: Nanji Great Stadium @ What J Summary