I tried all three kinds at the Fujiya store, including 'Milfie Burger (Aamoue Strawberry)' to eat chewily with Millefeuille by hand 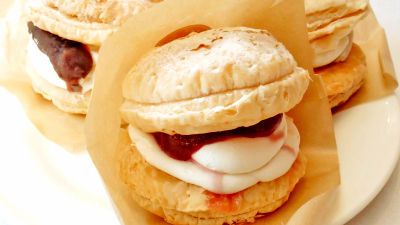 A new sensation sweet " Mille-feuille burger " to be eaten by hand has appeared on March 4, 2019 from Fujiya. Milleuille is a cake that is difficult to eat well with a delicate pie cloth, but "Mille-feuille burger" which made such a mille-feuille finish like a hamburger like a round shape so that it can be eaten with hands, is made from Fukuoka prefecture " Milfie burger (Amaou) strawberry " using strawberries - There are three tastes of " Kumamoto Prefecture Kimono " using Maron paste from Kumamoto prefecture · " Tokachi produced red bean " topped with Tokachi red bean soup stock Thing. Recommended new sensation for eating walk Because I was concerned about what kind of taste it is with Mille-feuille, I bought it at the shop and tried over it


I arrived at the Fujiya store. 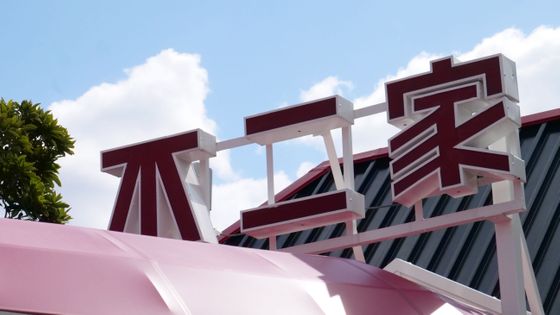 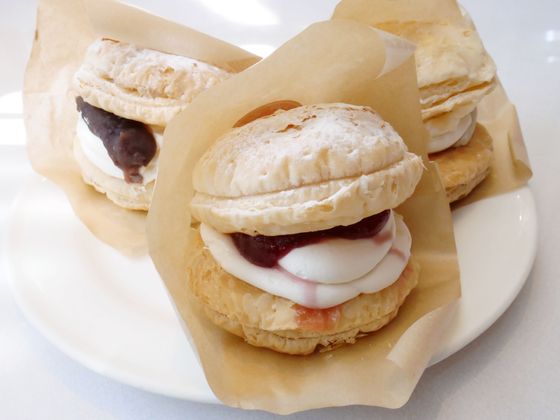 I will look at "Mille-feuille burger (Amaterou strawberry)". 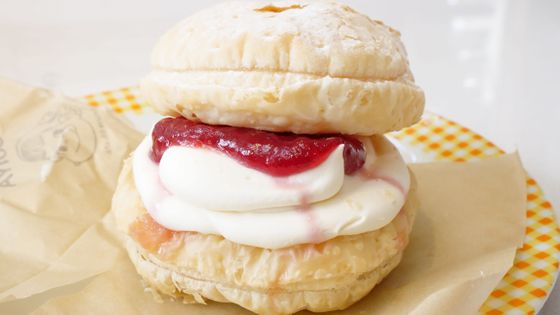 Compared with traffic IC cards in size, it looks like this. 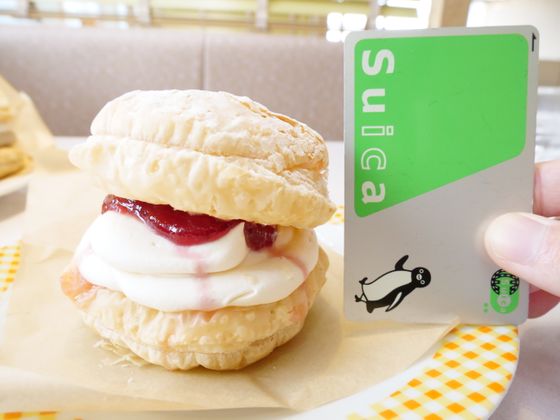 Trying off the top pie fabric, strawberry sauce is layered on top of the cream. 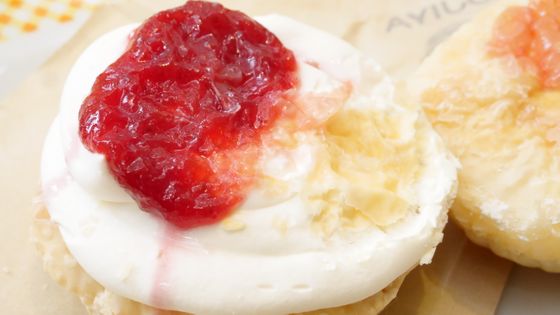 When I ate it, I enjoyed the cream milky squeezed by the perfect pie product with crispy buttery fragrance and sweet and sour taste of sweet and sour sauce sauce. 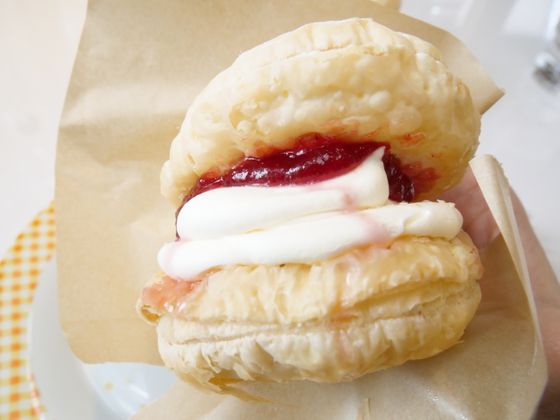 Although pie texture has a crisp texture when eating, when you enter into the mouth it also has a moist feel like melting smoothly and smoothly. 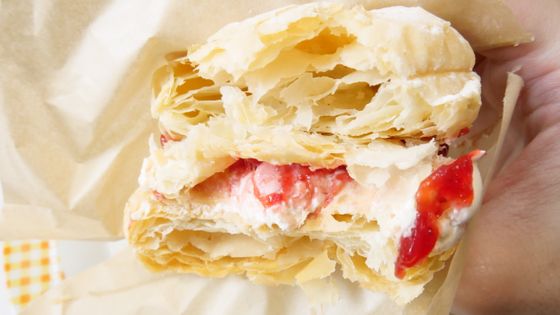 Next, I will eat "Mille-feuille burger (Japanese chestnut from Kumamoto prefecture)". 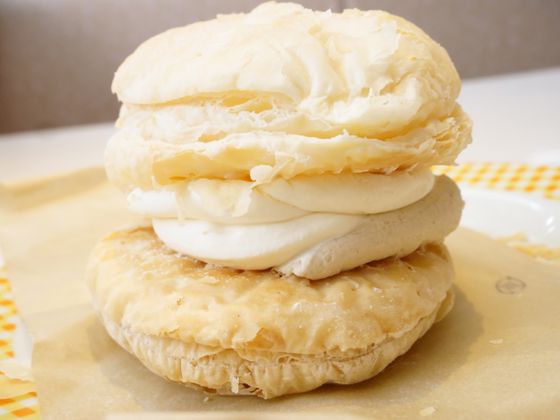 Under the pie cloth, Japanese chestnut paste was sandwiched with cream. 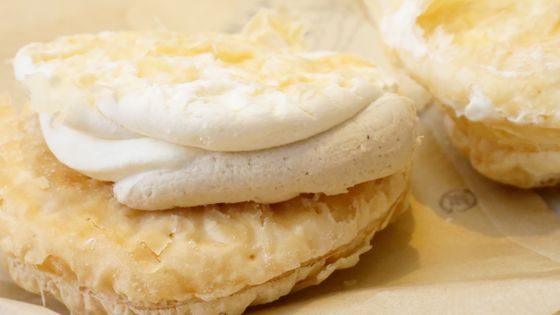 When I try to eat it, it matches well with Milky Cream with a sense of lactity, with the fragrance and richness of Japanese chestnut. The rich taste of the Japanese chestnut paste and cream was contrasting with the texture of fluffy and light pie cloth, which complemented each other well. 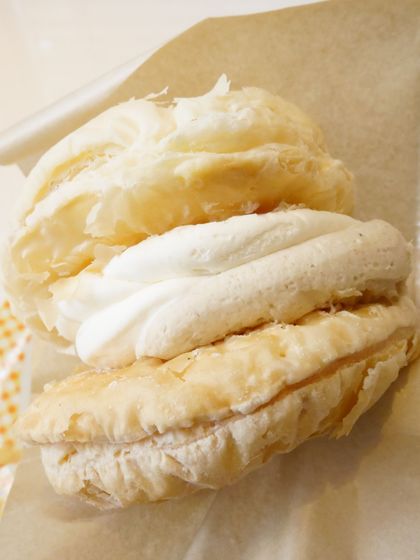 Next, I will eat 'Mille feuille burger (Tokachi produced red bean)'. When I gnaw it, sweetness is suppressed and the elegant fragrance of azuki be strongly felt. After the first delicious smell of bean paste spread in the mouth, the richness of milky cream remains as a aftertaste, so we enjoyed the flavor and texture alternating with each other as well as the crisp texture of the pie fabric. 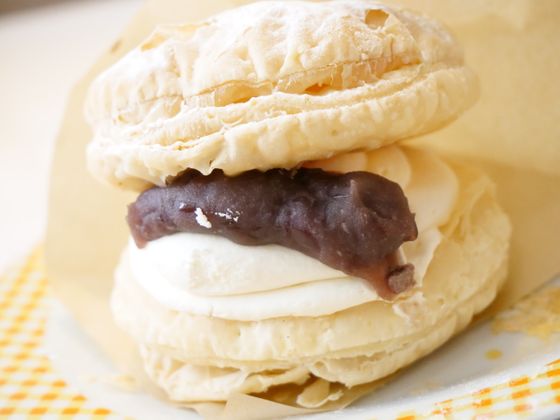 "Mille feuille burger (Amaou) Burger" "Mirufei Burger (Kumamoto prefecture Japanese chestnut)" "Mille feuille burger (Tokachi produced red beans)" can be purchased at stores in the Fujiya cake shop nationwide, prices are all 300 yen including tax. In addition to having some shops that do not have handling, depending on stores, there are a small number of items to be purchased and sometimes sold out soon, so if you want to eat certainly, it is also ant to request leaving by telephone.