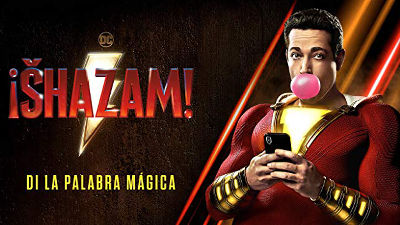 The 15-year old boy said "Shazam ! " The latest trailer of the movie " Shazam! " Is transformed into a macho superhero who is the strongest guy on the ground with Superman by casting it " Shazam! " Boy Billy Battsson is Usher Angel from the Disney Channel, Shazam after the transformation is Zuckerie Levi, who played the leading character of the overseas drama " CHUCK / Chuck ".

A boy called Billy Batson, led to a voice and called to the basement.

Puri laughing out and returning "Are you serious?"

But then Billy went to the roof of the building.

It will fly through the sky at a tremendous speed without falling.

In this way the boy Billy is given the power of Shazam, to the figure of an adult man.

Friedy, my close friend, is excited to see how plasma is generated when bringing my hand close to Billy 's chest.

To the question "What super power do you have?"

Billy is a pill.

A test called "What kind of super power is in Shazam?"

When manipulating the lightning bolt by hand ... ...

To a situation where a lot of money comes out from ATM.

You can buy "aichi" and place without any problems.

Two people who are excited about the super power I got.

One day, a person called "the villain" who does not take the police as a thing appears.

On the contrary, I have been torn down altogether.

"We are doing the opposite of superhero 's actions absolutely!" And a tough tsukkin.

Shazam that starts to help people aiming for resuscitation. A woman who is likely to be hit by a car ... ...

I will throw you outside the store.

Both "anything" and villain are fighting deadly.

But sometimes super power is out of control.

It is about to fall from the road.

Shazam immediately arrived at the falling point of the bus at hyper speed.

It was a hero that I do not know well whether to catch a falling bus, whether people are involved in disaster or saving people.

In addition, "Shazam!" Will be released on April 19th (Friday).