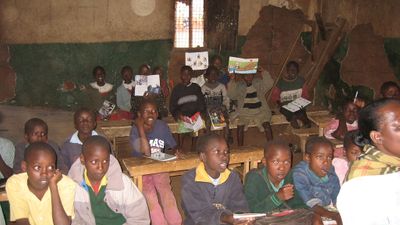 In addition to being treated as an official language in China and Singapore, Chinese is spoken among the overseas Chinese and Chinese who are in all over the world, and has speakers slightly over 1 billion people worldwide. In Kenya located in East Africa, it is talked about the decision to add such Chinese to "elementary school curriculum" was made.

On January 7, 2019, a government official in Kenya announced that "From 2020 we will introduce a curriculum to learn Chinese official language (Mandarin) in elementary school education in Kenya." Julius Jwan, CEO at the Curriculum Development Institute (KICD), which develops educational curriculum in Kenya, says that syllabi such as methods and order on Chinese language education have already been created.

"We have prepared a Chinese language curriculum from 2020 for children over 4th grade in elementary school that we want to learn Asian language," Mr. Jwan said, the Chinese curriculum is French, Arabic Language and German as a new option for learning foreign languages. KICD believes that Chinese is one of the most widely spoken languages in the world, Kenya is not negligible for Kenya.

Mr. Jwan said, "China's position in the global economy is strong, and if people in Kenya can understand Chinese, it will benefit greatly," he said in Chinese language in Kenya We believe that an increase in Chinese tourists can be expected by increasing the number of speakers. In recent years, Kenya and China have strengthened economic and political connections, and in that sense it seems to be meaningful for Chinese language education. In Kenya we are improving the quality of education and focusing on the skills students can acquire in education. KICD and government officials are watching that by putting emphasis on the education of foreign languages from the point of elementary school, it is possible to acquire the skill which can be used in the labor market.