Final specification of masterpiece 'Pac-Man' remaining in game history All pages are released in academic journals, and interviews where the creator speaks behind the scenes of development 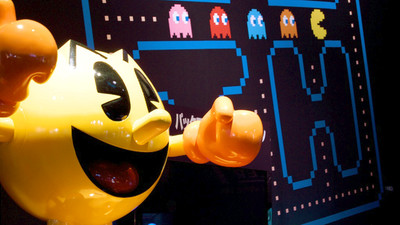 " Pacman " released from Namco in 1980 is a game that manages the yellow Pac-Man and eats all the dots in the maze while paying attention not to be shot by the monster. The movements of monsters that change their movement according to Pac-Man's movement surprised those gamers, a big hit. In 2005 we received the certification of Guinness World Record as "the most successful commercial game machine".

An interview with Toru Iwatani who developed such "Pacman" and a final specification of "Pacman" are published in the academic journal "Artificial Intelligence Vol. 34 No. 1" issued by the Society of Artificial Intelligence. The PDF file (22.07 MB) of the body can be downloaded by clicking "34-1 _ 086 - 09 _ F 00 article 1. pdf (22.07 MB)" on the following link destination. 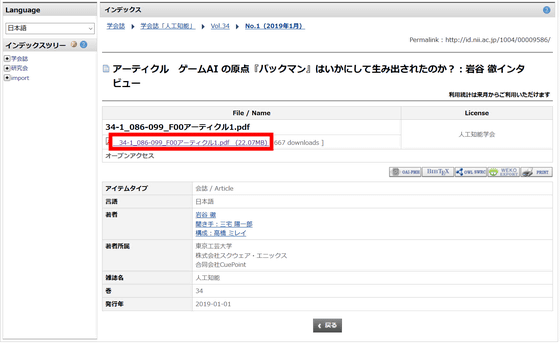 In the interview, Mr. Iwaya talked about the circumstances and the concept of development until making "Pac-Man". In addition, Mr. Iwatani said that he set up personality in four symbolic monsters among Pac-Man, and set an algorithm to control each automatic action. The algorithm set for the "Pac-Man" monster is just a pioneer of contemporary AI (artificial intelligence). 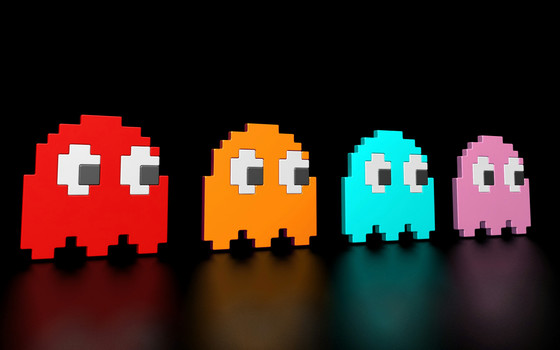 Although it was often used in games at the time of the 1980's that "even the settings that are not particularly difficult from the side of the creator who is developing the game have become insanely difficult for ordinary players", " If there is a game control system "novice players will not suffer extreme high difficulty. However, interestingly, according to a subsequent survey, it seems that it turns out that the introduction of the "self-game control system" has somewhat lower sales than the game of high difficulty. In the final specification of "Pac-Man" which all pages are published simultaneously with the article, various settings such as the difficulty table and the speed table of the monster are summarized, and worshiping the design of the game screen using the pattern sheet I can. In addition, provisional specifications made at the beginning of the development are also posted, so you can see that the concept of "Pac-Man" and the maze pattern have already been almost completed at this point.

In addition, "Pac-Man" was adopted by Google Doodle in 2010, which is the 30th anniversary of development, and mini-games that can actually play arcade specifications on Google's logo-type maze stage were released. Since you can play from the following page, please be sure to play with people you care about. 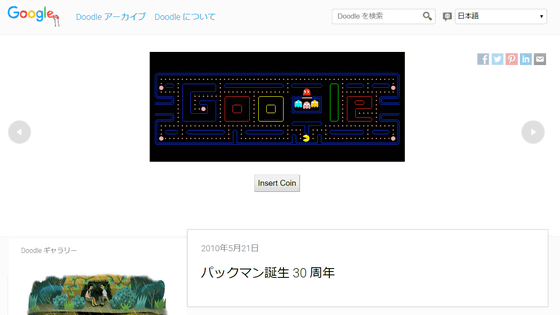