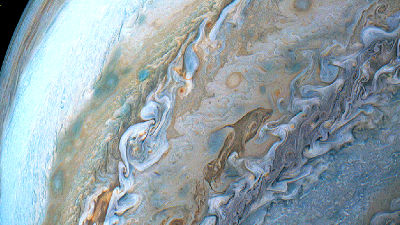 The appearance of dolphins swimming the surface of Jupiter, which is a giant gas planet, was observed by the Jupiter Jupiter " Juneau " by NASA.

Although it is "dolphin of Jupiter", this is of course not a real dolphin, but a state of clouds that looks like a dolphin has been observed. Between clouds of whitish whirlpool bands clouds like dolphins with dorsal looks brownish in color. One piece that understands a little more dolphins. It is a dolphin that seems to swim with the sweep from the left to the right of the photo, but since the diameter of Jupiter is 11 times larger than the Earth, probably this dolphin should be about the size of the Earth. The psychological phenomenon that reminds me of something different from one pattern is called Palaleidia, and the binoculars look like owls, and the intercoms look like a human face . Sometimes nature gives surprise.