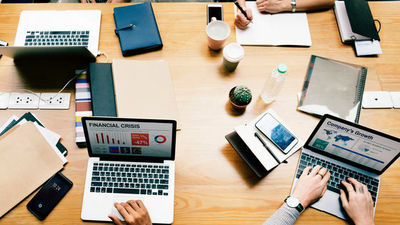 Many people do not appreciate the silence flowing in the meeting place, thinking the ideal is an ideal meeting which actively discusses in a meeting place. However, among well-known companies like Amazon, we are using a "quiet conference" to hold meetings without saying words to open up a meeting on the virtual ground to gather in the real world There seems to be one.

Why silent meetings at work are effective and inclusive - Quartz at Work
https://qz.com/work/1422191/why-silent-meetings-at-work-are-effective-and-inclusive/

Amazon CEO Jeff Bezos is one of the people who began to adopt a silent meeting. At the conference where Mr. Bezos gathered Amazon's senior officers and opened it, he took notes through materials prepared by everyone before starting to talk, and he said that the silent time will last for 30 minutes plenty.

The time to take this memo may seem wasteful of time at first glance, but it seems that according to Mr. Bezos it will result in saving time. By taking notes, you can examine important topics and themes and gather information on relevant data and objections. In addition, Mr. Bezos thinks that it will not be too emotional during the meeting, because you can calm down and organize the content of the material in your mind.

Previously, when Mr. Bezos did not adopt the quiet time to read the materials before the meeting, participants in the meeting said they were speaking at a low level like a high school student who did not do homework. Mr. Bezos said that by considering the subjects of the conference participants beforehand and discussing the theme beforehand, the content to be talked about is focused on essential and important matters. It is not limited to Amazon that likes quiet conferences. In Square of a mobile payment company, after Arisa Henry , former senior executive at Amazon, became responsible for engineering, he promoted reforms to use notebook PCs and Google Docs instead of paper and pens We are introducing a quiet meeting as part of reform.

Mr. Pierre-Yves Ricoh , engineer at Square, is a blog I wrote about this quiet conference and says it will take some time to get used to. Mr. Ricoh talks about a quiet meeting to be held at Square, "The conference room is full of senior leaders in Square" "People gaze at their computers and after silence time lasts 30 minutes The meeting will finally start. " In a quiet conference in Square, real-time comments are written in Google Docs during the silence of 30 minutes, each questioning and answering a question.

Mr. Henry said, "In a traditional conference system, the voice of a person such as a woman or a remote employee declines, or a voice is blocked out by saying loudly while making an idea," the merit of a quiet meeting Is not an element such as the size of the voice or how to talk, but the point is that the most correct and most useful idea is evaluated. By leaving the interaction in Google Docs, the participants forget the previous remarks and do not repeat the same interaction, the conference that started after the silence of 30 minutes is essential but ends only with a few utterances is. At the Post Growth Institute conducting research aiming for a sustainable society, he said he was using a Skype chat function to completely eliminate utterances from his mouth. "Unlike videoconferencing, quiet conferences using Skype do not require you to listen to other people's words or turn their eyes on, so you can easily refer to shared content and previous remarks, I can write my own opinion, "the official of the Post Growth Institute said.

Also, at the conference by Skype, in the remarks that participants thought "This is important" "I want to make a loud voice if it is a conference by utterance", write an annotation to know that "this remark is important" in capital letters And that. This makes it easier to pick up important statements in keyword searching when referring to the meeting log later. If quiet conferences continue to spread in other companies in the future, instead of shouting loudly at the conference, they may be attracting attention of participants in such a way as to highlight characters typed on the screen or to type in uppercase letters. not.