It is very important to follow the traffic rules, but it is likely to happen that "there are no cars on orthogonal roads at good intersections, but you can not help stopping because there is a red light". Ozan K. Tonguz who is a professor of computer engineering at Carnegie Mellon University explains about "trying to create a wasteless transportation system by communicating with each other" to improve such a traffic system.

Traffic congestion has become a big problem for car society, and it can take two hours to commute in the morning in the suburbs of big cities such as Moscow, Beijing and Cairo, and it can take 3 or 4 hours to commute one day if you include a way home. If you can reduce your commuting time from 3 hours a day to 2 hours, you can save 22 hours in a month and 3 years in a 35 year period, if you think in the workplace on a 2 day weekly workday.

In order to solve the problem of such long time commuting, many start-up companies are conducting research and development aiming at improving transportation systems. One of them is the technology "Vehicle-to-Vehicle (V2V)" developed by Mr. Tonguz and his colleagues. This is to make vehicles wirelessly communicate with each other so as to eliminate traffic signals such as traffic lights and to improve the efficiency of the traffic system. By using the communication function installed in the car, it is possible to obtain a smooth and safe vehicle The algorithm that can run is used.

Mr. Tonguz launched a startup called Virtual Traffic Lights (VTL), and from May 2017 it is experimenting on the road near Carnegie Mellon University using real vehicles. Official demonstrations of VTL are being carried out in Saudi Arabia in July 2018, VTL officials including Mr. Tonguz said, "With the development of V2V technology, the age where traffic is controlled by traffic lights is over, There is no need to hang on the red light at a non-intersection and wait for it without waiting, "he said. Since the traffic signal has been introduced in the first half of the 20th century, the system has not evolved for a long time. Basically, it controls the green light and the red light by the timer, and even if it is an intersection where no one passes by, it has to stop if the signal before me shows red. You can slightly change the timing of red and blue according to the commuting peak in the morning and evening, but after all it is only fine-tuning the time to switch the signal, and many people are stressed with the signal.

With this algorithm, it is said that a leader car is not always playing its part in a single car, but it is supposed to keep turning according to timing and circumstances. In this system, it is not a traffic light, but a "approaching time with other group cars" to decide whether or not to cross the intersection. Therefore, Tonguz explained that it is no longer necessary to keep on waiting with a red light at an intersection where other vehicles do not exist, and if you do not need to stop, you can always keep running. For each vehicle to communicate, the VTL system uses a wireless communication method called DSRC . It is said that DSRC developers have developed DSRC assuming various uses such as collection of electronic fee and driving control emphasized with other vehicles, but unfortunately there are not so many vehicles equipped with DSRC about.

However, in the VTL system using the next-generation communication standard such as DSRC or 5 G, each vehicle transmits information during traveling every tenth of a second. The direction of travel is transmitted as data to the latitude and longitude of the vehicle, and the processor mounted on the vehicle superimposes the position data including the surrounding vehicles on the digital map service in Google Map, Apple Map, etc., and the other vehicles and intersections Calculate the distance to and. Therefore, a decision is made as to whether the leader car or the next intersection in the train is a green light or a red light, and information is transmitted to the driver. 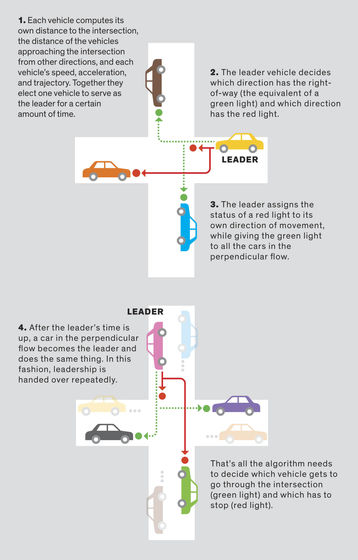 The VTL system is not a centralized operation, but a distributed system where individual vehicles transmit and receive information in cooperation with each other. Mr. Tonguz said, "For example, insects and fish colonies change their direction of traveling with nobody, so they receive information from the movement of neighboring individuals and change their direction of travel" doing. The introduction of a new transportation system based on V2V is said to bring about a major change in the transportation system which has not changed near the century since the first half of the 20th century.

Mr. Tonguz used a virtual model of the city of Pittsburgh , Pennsylvania state and Porto of Portugal in the United States, and checked how the VTL system works. It seems that we obtained traffic data in both cities from the US and Portugal institutions and tried the effect of the VTL system using Google Map and SUMO urban migration simulation software developed by Germany.

SUMO simulated the existing transport model and the scenario when using the VTL system at the commute rush of both cities. As a result, the VTL system was able to shorten the average commute time in Porto from about 35 minutes to about 21 minutes 20 seconds, in Pittsburgh the average commute time from about 30 minutes 40 seconds to about 18 minutes 20 seconds. On average, commuting time reduction of about 30% was realized, and some people achieved commuting time reduction of 60%. As a reason why the VTL system was able to drastically reduce commuting time, Mr. Tonguz said "It is no longer necessary to stop without meaninglessly with a red light" and "VTL system is introduced not only at the intersection where traffic lights are located but at all intersections I did not have to stop with a road sign because I did. " Also, Tonguz says that the number of accidents can be reduced 70% by avoiding troubles at intersections where many accidents occur, and carbon dioxide emissions will also be reduced.

Although Mr. Tonguz has made a prospect that DSRC will be widely spread over time, unfortunately, since the number of DSRC-equipped vehicles is small in 2018, it is impossible to immediately introduce the VTL system. So the fact that the VTL system is actually useful is not necessarily a matter of a long way ago. If DSRC is not installed in all vehicles, we can not fully demonstrate the effectiveness of VTL system, but by integrating VTL system at existing intersection and communicating with some DSRC equipped vehicles, it is possible to partly implement VTL system You can switch signals using. When checking this model with SUMO, it seems that it was estimated that 23% better traffic efficiency can be achieved than the current control system.

Also, the big problem with the realization of the VTL system is the balance with pedestrians and bicycles. Tonguz and others are devising a short-term solution where pedestrians stop their vehicles in all directions when they push the button because the public can not always carry the DSRC communication equipment. In the future, it is said that the research team is conducting research as detecting the presence of a pedestrian with a camera mounted in the vehicle and allowing a system to automatically develop a way to give way. 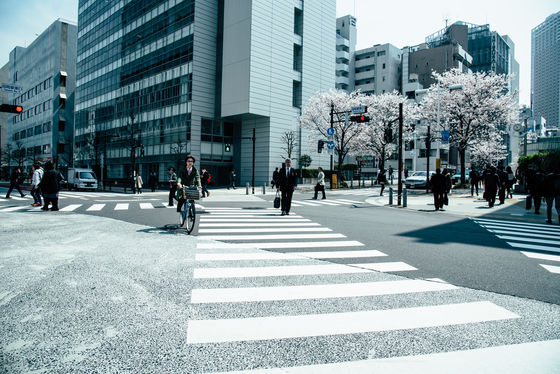 Mr. Tonguz thinks that "VTL system works very well when combined with the automotive vehicle that has been developed recently". Although the complicated situation of "automatic car entrance into a crowded intersection" is a weak point, introducing the VTL system eliminates the situation of "crowded intersection", so the affinity of the automatic driving system and the VTL system is Tonguz argues that it is very high.