'There are times when' death 'is better at times', 'Pet Sematary' original movie 'Step by step' 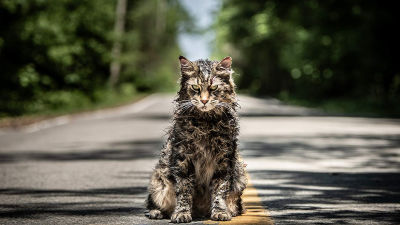 Steven King 's novel "Pet Sematary" (pet cemetery), which was rumored to be "scary about being announced at a terrible level" after the completion of the manuscript, will be made into a movie again for the first time in about 30 years since 1989 Well, the trailer has been released. The title " Sematary " ( spiritual ) is basically spelled as "Cemetery", but the signboard at the entrance to this cemetery is a setting that there is a misspelling because children are handwritten.

Four friendly friends were on board. To a girl who says, "There are plenty trees ..."

It is mother Rachel who returns "It is very beautiful."

A new house built in the forest.

Rachel looks surprisedly to the loud noise that suddenly echoes.

The house was right next to the road, it was the sound that a huge dump truck ran away.

I hug my son strongly.

It is the sound of drums that echoes in the deep forest.

A small drumcian fighter passes by.

The identity of the drum-fighter is children who have a creepy face.

It was a cemetery where countless graves were lined up.

"Children used to go to that place at night, the children knew the power of that place," the man says.

Something is done in the cemetery ......

When my father Lewis gets up in the morning ...

The foot was dirty for some reason.

A figure of a man who does something in a cemetery.

A cat that does not look alive.

"It may sound like a foolish fairy tale, but there is something in that forest,"

"Someone" who is not a child this time enters the forest with the face of the animal.

A man with a creepy face in the house.

The figure of a son in the dark.

Rachel staring at her figure for some reason.

"There is something in that forest that" brings back "

"Sometimes," death "has better time", so the movie will be released nationwide on April 5, 2019. The date of publication in Japan is undecided at the time of article creation.

The Amazon review of the novel "Pet / Sematary" is as follows. Please be aware that the story's spoilers are included. The theme is family love, death, contraindications. The most salvation story in the King's feature film


I am scared even if I read it now.
The hero loves his family too much,
It is real that it is being taken into contravention.

In this work, the so-called modern horror feature film of King,
It is the darkest. There is no salvation story.
There is no understandability like battle between good and evil.
The main character has only to proceed the way of ruin for "for love".
It is a bad story.

The main theme of this novel is "
I think there are two.
One is "family love."
The second one is "death" itself.
As a further small theme,
There is "taboo (contraindication)" = "sanctuary".
Modern horror masterpiece,
Better than "Shining" and "Christine"
The redundancy of the theme brings interest to the story development.


Even though King's work actually knows that there are better works, for me it is absolutely nothing more than this. The fear of losing a child, there is a tragedy beyond that, as King himself was written at the time he was concerned about the child's illness, the straight feeling is intensely given out.

It is written with the conclusion that it is hard to endure how hard it is to face death, how to deal with the death of a loving child. Pretty King work has become a work of a different color.

Many are said to be sealed because they are too afraid or because the publication period has shifted, but in reality, as King's own feelings have gone too far and you can not be told that a love letter you wrote in the morning will come in the morning I think I made you hesitate. My daughter also died of fatal illness in a few months after birth, but I felt a fateful thing to read while I was in the hospital.

The fear, the feeling of loss is a thing which can not be filled even if it has what, but for me it is a work that became a kind of salvation.