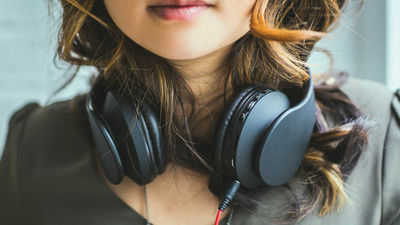 The International Federation of the Phonographic and Video Producers (IFPI), an international music industry group based in the United Kingdom, has released a report analyzing trends in music consumers around the world. The report summarizes the shocking facts about global music consumption, such as 'YouTube accounts for 47% of music streaming services' and '38% of all music consumers listen to music by non-legitimate means'. Has been done.

From April to May 2018, IFPI conducted a survey of music consumers aged 16 to 64, and found that people listen to music on average 17.8 hours a week, per day. People are listening to music for about 2.5 hours. We also found that 86% of music consumers use on-demand music distribution services, and 75% use smartphones as devices for listening to music.

When asked 'what to choose if you can only listen to music by one means' to young people aged 16 to 24, 50% answered 'music distribution service'. There are various music distribution services such as YouTube Music, Spotify, Amazon Prime Music, etc., but 38% of all users also listen to music using pirated editions and download services that infringe copyright. It is known by investigation. 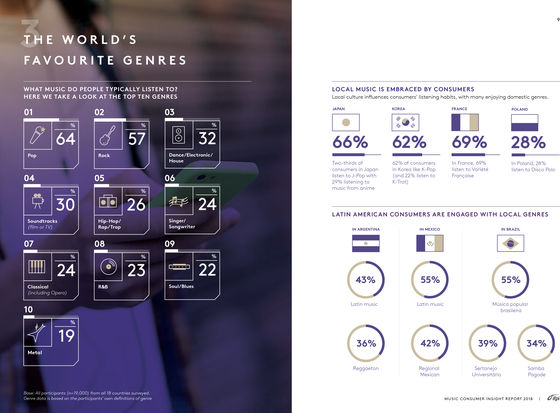 Countries such as Mexico (93%), Brazil (92%), and Argentina (89%) are ranked as countries with a high percentage of smartphones used for music playback. Also, 30% of people say they follow their favorite artists on social media. The survey also found that radio users are also persistent. Eighty-six percent of people say they listen to music on the radio, and 25% of the total time they listen to music comes from radio broadcasts. Looking at the percentage of people who use radio by country, it seems that more than 80% of music consumers use radio in many countries, but South Korea (66%) and Japan (50%) are in the world. Looking at it, it is a low number. Unfortunately, as many as 38% of music consumers listen to music delivered or uploaded in a way that violates copyright. The music industry is increasing pressure to sue against 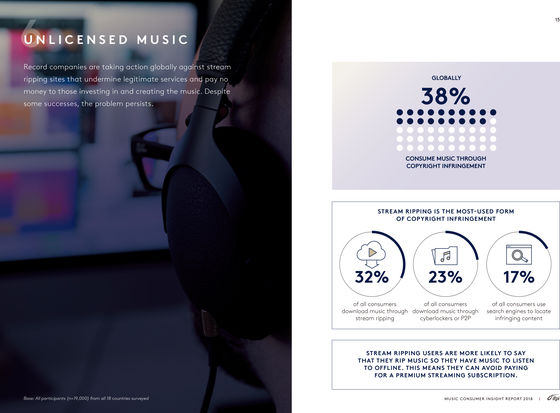 In populous China, as many as 96% of people consume music. 89% of people use streaming services, and the total time spent listening to music a week is about 15.5 hours. It also shows that many people share their favorite music on SNS such as It turns out that Bollywood- related music is very popular, perhaps because the movie is flourishing. 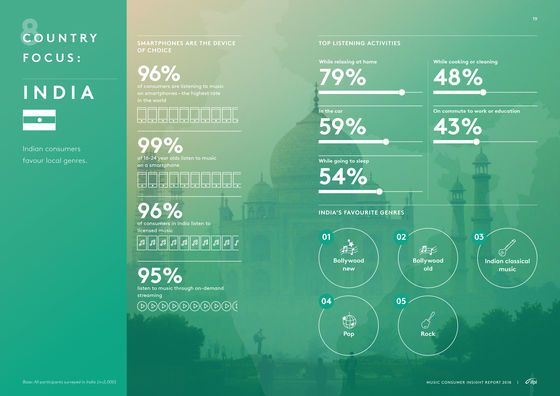 Looking at the report released this time, it is clear that the wave of digitalization is rushing into the music industry. In the future, the music industry is expected to focus more on music distribution services than ever before, and to eradicate illegal music download services and pirated editions.